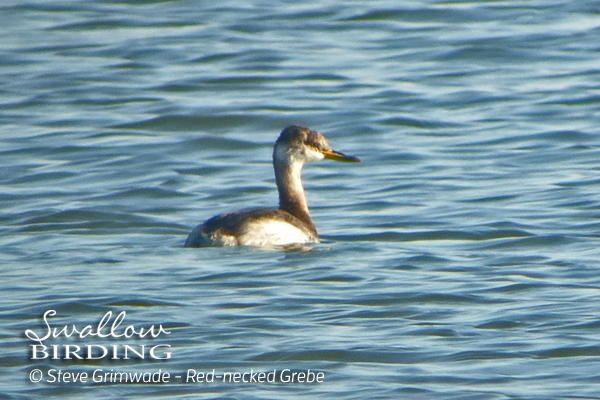 It was a misty, murky start as we made our way north towards Britain's smallest county, Rutland. On arrival at Rutland Water, the mist cleared and we were treated to a fantastic clear day.

After getting permits from the centre we had a quick look from the viewing gallery in the Anglian Water Birdwatching Centre. A small flock of CURLEW plus quite a few COMMON SNIPE were seen frequenting the vegetated islands. Wildfowl were ever present and the pick of these were GOOSANDER, GOLDENEYE and some smart drake PINTAIL.

With the light nice and bright we made our way along the trail noting up to five BULLFINCH, REDWINGS and two GREAT SPOTTED WOODPECKERS. It was then straight to the hides overlooking Lagoon 3 and the first bird we laid eyes on was a superb RED-NECKED GREBE that was often seen in company with a GREAT CRESTED GREBE which gave superb comparisons of size and plumage. A small party of COMMON SNIPE were seen on a reed-cut island plus three BLACK-TAILED GODWIT including one colour-ringed individual.

From the next hide we found hundreds of feeding TUFTED DUCK, WIGEON and COOT but little else although several COMMON BUZZARD livened up proceedings. It was then to the hides overlooking Lagoon 4 and although water levels were very high, we did find good numbers of EGYPTIAN GEESE and a good roost of COMMON, BLACK-HEADED, HERRING, LESSER and GREAT BLACK-BACKED GULLS.

It was then back to the centre for lunch and as we wandered past the feeding areas we noted both COAL and MARSH TITS on the feeders.

Whilst having lunch we watched a pair of STONECHAT on reedmace from the visitor centre, plus a small flock of GOLDED PLOVER and a MARSH HARRIER.

We then drove towards the North Arm and along the way found two GREAT WHITE EGRETS roosting along the northern shore. From our viewpoint further down the road we eventually found a winter-plumaged BLACK-NECKED GREBE and although it was pretty distant, it had the decency to join a GREAT CRESTED GREBE once again for ID comparisons.

As we were standing there, news came in of a female Ring-necked Duck at Eyebrook Reservoir which was only twenty minutes away. We made the decision to head down there and after finding a suitable place to park, made our way to an opening overlooking the reservoir.

The first bird Steve got his scope on was the female RING-NECKED DUCK which was seen in company with TUFTED DUCKS on the northern shore. We watched it preening before going to sleep but this didn't last long as soon the whole flock was disturbed and they flew off!

We watched the RING-NECKED DUCK in flight until unfortunately it was lost to view. We then moved to another area where we watched a large mixed flock of GOLDED PLOVER and LAPWING plus around six DUNLIN. A RED KITE was seen over the nearby hillside and once again we located the RING-NECKED DUCK, but it was rather distant and with the light going we decided to head home after what had been a very productive day of birding.
Next
Previous