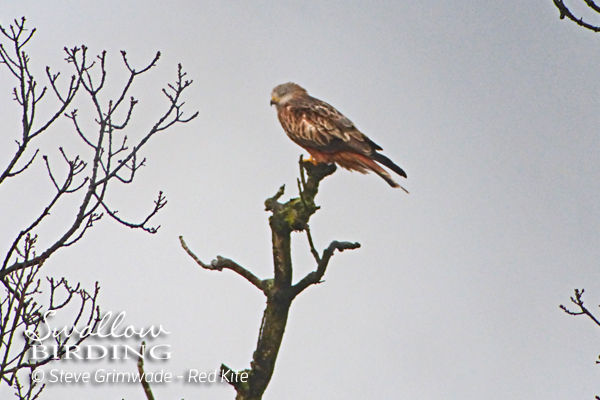 The day started very wet as we made our way northwards through Norfolk and it didn’t really get light until we reached Hunstanton. Our first port of call was Thornham Marsh where we soon located a flock of around 70 TWITE conveniently perched in a tree after coming off the saltmarsh, which was something we hadn’t seen before.

A scan over Holme Marsh produced PINK-FOOTED & BRENT GEESE that were disturbed by a passing MARSH HARRIER. We then moved the short distance to Titchwell Marsh RSPB reserve and noted many common birds around the feeders near the visitor centre. Along the path we watched a WATER RAIL feeding along a ditch which gave good views.

Out on the freshmarsh water levels were very high although we did see a small flock of AVOCET along with WIGEON TEAL, POCHARD, TUFTED DUCK and a hybrid POCHARD x TUFTED DUCK. A young male PEREGRINE terrorised everything in sight as it made several passes over the reserve.

We took a walk out to the beach and by now rain had started to fall quite steadily, but we did manage to see SANDERLING , RINGED PLOVER, BAR-TAILED GODWITS and both GREAT CRESTED GREBE and RED-BREASTED MERGANSER on the sea.

It was then back to the van for lunch and a warming hot drink before making our way out to Burnham Overy where the rain had eased considerably and now only consisted of a few spots!

A large flock of BRENT GEESE greeted us as they fed on the wet fields, whilst skeins of PINK-FOOTED GEESE flew over us. A scan over the marsh produced some exciting birding with up to three SHORT-EARED OWLS hunting over the marsh along with two BARN OWLS.

Two juvenile ROUGH-LEGGED BUZZARDS showed well out on the marsh with up to three COMMON BUZZARDS thrown in for good measure. A look through the geese produced two BARNACLE and around eight WHITE-FRONTED with the many PINK-FOOTED GEESE.

With some time remaining we visited a site where we saw up to nine RED KITES coming into roost which rounded off our first day trip of 2015 quite nicely!
Next
Previous