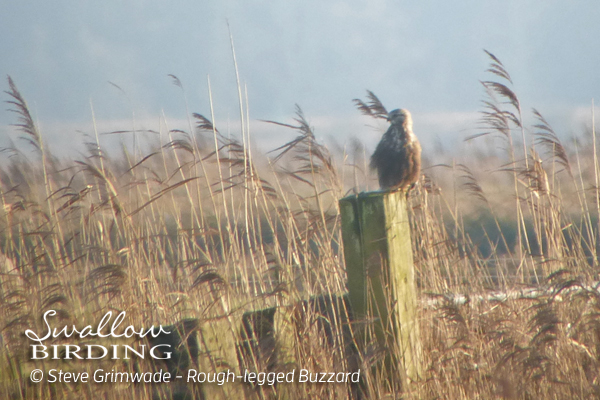 Our popular pager trips started in Suffolk with a visit to a frosty North Warren RSPB reserve which produced a large flock of BARNACLE GEESE plus around 70 WHITE-FRONTED GEESE and many common wildfowl roosting out on the frozen puddles.

It was then swiftly on to Covehithe where we wandered down to the broad and immediately came across birders watching three very confiding SHORELARKS which fed along the edge of the water. Whilst here we also noted STONECHAT, MARSH HARRIER and five SNOW BUNTINGS which landed on the beach close by.

Back in the village we found two BRAMBLING along with a mixed flock of LINNET, CHAFFINCH, GREENFINCH and GOLDFINCH.

Moving northwards, we stopped at Ness Point, Lowestoft for a spot of lunch which produced a fine adult MEDITERRANEAN GULL that flew south. We then took a walk along the seawall where we picked up a single PURPLE SANDPIPER feeding on seaweed-covered rocks.

Our next port of call was Halvergate Marshes and within a few minutes of arriving, we had great scope views of a juvenile ROUGH-LEGGED BUZZARD. Other species here included GREEN SANDPIPERS, COMMON BUZZARD, KESTREL and thousands of PINK-FOOTED GEESE.

The day concluded with a visit to Hickling Broad and on our arrival, the carpark was packed but we made our way down to the viewpoint taking it very steadily over icy roads.

After finding a space on the viewing area and soon noted two COMMON CRANES on the ground which could be heard calling frequently. Around 30 MARSH HARRIERS were seen over the reedbed whilst in the ditch behind the watchpoint a KINGFISHER perched for over 30 minutes.

Another 15 COMMON CRANES were seen along with nine BEWICK’S SWANS that flew south, rounding off another fantastic day!
Next
Previous