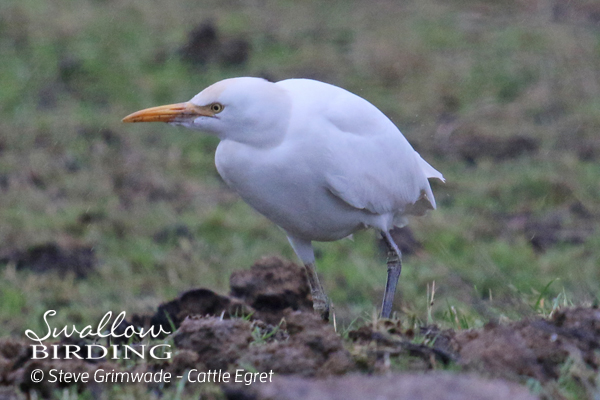 A wet and wild day down in Kent began at Pett Levels, where despite no other birders being present we relocated the winter-plumaged LESSER YELLOWLEGS feeding alongside LAPWING, REDSHANK and DUNLIN on a windswept pool.

A brief stop at Scotney Gravelpits using the van as shelter produced a winter-plumaged BLACK-NECKED GREBE plus a first-winter male SCAUP that was present amongst a flock of TUFTED DUCK. At the eastern end of the pits we found a large flock of feral BARNACLE GEESE with a few BARNACLE x SNOW GEESE thrown in for good measure.

Our next port of call was Lydd where we quickly found the two wintering CATTLE EGRETS wandering about the wet cow field and giving close views as they fed, unconcerned with our presence.

After a quick toilet stop on the RSPB reserve we spent some time birding the ARC pit to the north. A KINGFISHER gave stunning views as it caught fish from the overhanging branches. A GREAT WHITE EGRET flew over and two BITTERNS were seen in flight over the back of the pit.

A pair of PEREGRINES really put on a show over the water and came past us quite close, which disturbed a few GOLDENEYE and TUFTED DUCK from the sheltered corner of the water. At least two CHIFFCHAFF showed well next to the hide and back in the carpark we watched six REED BUNTINGS and another GREAT WHITE EGRET in a reed-fringed pool.

It was then time for lunch in the visitor centre and whilst enjoying a warm drink we saw at least six SMEW on the far side of the pit. After a break we visited a hide where we found a total of 12 SMEW plus MARSH HARRIER and hundreds of SHOVELER.

With the weather vastly improved we visited the fishing boats and took a look at the sea. Good numbers of KITTIWAKE plus CORMORANTS were present with just a couple of GUILLEMOTS, GREAT CRESTED GREBES and a male EIDER which flew past. GANNETS and RED-THROATED DIVERS were much more numerous as they battled into a headwind.

The day concluded with a visit to Walland Marsh where up to 75 BEWICK’S and a single WHOOPER SWAN were seen feeding on the winter wheat.
Next
Previous