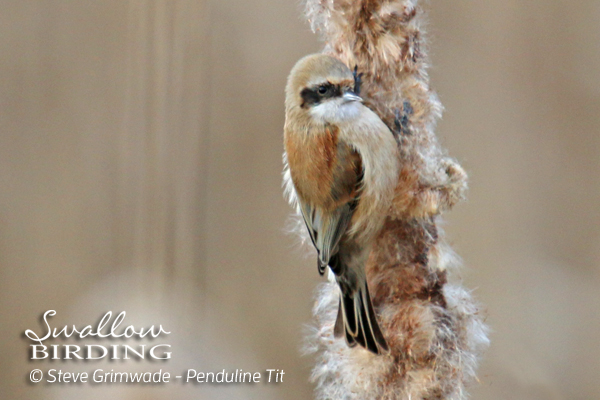 Saturday 24th January 2015
We left Essex bright and early and made our way around the M25 where we noted two RING-NECKED PARAKEETS flying south. After a stop at Fleet Services we carried on southwestwards noting good numbers of COMMON BUZZARD plus four RED KITES.

Eventually we reached Exeter and with no sign of any Penduline Tits at nearby Dart's Farm we decided to head down to Broadsands. After a few minutes, we located our first male CIRL BUNTING in an adjacent hedge and over the next 30 minutes had excellent views of up to 12 birds including some fantastically well marked males. REED BUNTINGS and DUNNOCKS were very numerous as they came down to seed put down by local birders to ensure their survival through the winter months.

We then wandered over to the bay which produced GANNET and lots of GREAT CRESTED GREBES. With things a little quiet, we strolled over the headland to Eldberry Point where we had fine views over the bay. We soon picked out at least three BLACK-NECKED GREBES and then a fine RED-NECKED GREBE offshore.

Other species here included FULMAR, TURNSTONE, COMMON BUZZARD and OYSTERCATCHER, but strangely there was no sign of any divers.

It was then time to explore the marsh but apart from a couple of GOLDCREST it was rather quiet, so with time getting on we headed back to the van for a late lunch before making our way into Cornwall.

COMMON BUZZARD was by far the most numerous bird and it was great to see them doing so well in the southwest. As we drove along the back roads, a couple of RAVEN were seen flying over.

After checking in we had some time to relax before meeting for a pre-dinner drink and to complete the bird list, before enjoying our evening meal which went down very well after a long day.


Sunday 25th January 2015
We met at 7.00am for an early breakfast and as soon as it was getting light we headed down to Penzance where our first stop was the Jubilee Pool. A couple of PURPLE SANDPIPER frequented the rocks below us and on the harbour wall we watched a reasonable sized flock of TURNSTONE.

With weather slightly overcast and visibility good we started scanning the bay for the long-staying Pacific Diver. Good numbers of GREAT NORTHERN DIVER were seen and totalled around 20 birds. Five COMMON SCOTER were seen near St. Michael's Mount and a SLAVONIAN GREBE was spotted on the north shore.

Despite a lot of searching, we could not locate this scarce bird and things didn’t improve when it came on the pager as being seen! We moved location only to find that we had missed it by five minutes. Despite a very thorough search we did not pick it up, but it was seen again during the day which was very frustrating indeed!

We took a lunch break in a nearby supermarket, giving us the chance to warm up and then headed back to Long Rock where we had yet again, another fruitless scan of the sea. Taking a walk along the coastal footpath towards Penzance, we noted lots of PIED WAGTAILS and ROCK PIPITS with the occasional GREY WAGTAIL thrown in for good measure.

Eventually we had excellent views of a female BLACK REDSTART on the rocks as she fed on numerous insects that were seeking shelter on the shore.

The opportunity was taken at various points along our walk to scan the sea which produced two SLAVONIAN GREBES, 2 EIDER and yet more GREAT NORTHERN DIVERS!

With the weather due to change late afternoon, we had a change of scenery at Carbis Bay, where visibility was excellent and we were treated to even more GREAT NORTHERN DIVERS totalling around 18 birds.

A winter-plumaged RED-NECKED GREBE was seen offshore, plus small a number of KITTIWAKES and a few GANNETS. Whist watching the feeding GANNETS, a pod of COMMON DOLPHINS appeared, feeding and breaching which was simply amazing!

Whilst watching these great cetaceans, a pod of BOTTLE-NOSED DOLPHINS joined them and again put on a great show. We eventually picked out a BLACK-THROATED DIVER alongside a GREAT NORTHERN DIVER which was very useful to compare ID features.

By now rain had started to fall, so we drove down to the Hayle Estuary where we could at least sit in the hide if it got any worse. Viewing from the hide was reasonably productive with GOLDEN PLOVER, REDSHANK, CURLEW and LAPWING, but the highlight was a male KINGFISHER that perched up in front of us giving stunning views.

With some light still remaining, we walked to the estuary where TEAL and WIGEON were plentiful, plus BLACK-TAILED GODWIT, SPOTTED REDSHANK and lots of roosting gulls. After a while, the light beat us so we headed back to base after what had been a good but fairly frustrating day.


Monday 26th January 2015
Light rain was falling before we went in for breakfast but luckily it had stopped by the time we had finished. Our first sites of the day were Helston sewage works and boating lake, and just after getting out of the van, Andrew spotted what looked like a good candidate for a Ring-billed Gull but unfortunately it quickly flew off and didn't come back!

Over at the sewage works, it didn't take us long to locate our first CHIFFCHAFFS of the day, taking advantage of the still conditions to forage for insects in the trees and bushes bordering the works. A few minutes later, a fine SIBERIAN CHIFFCHAFF flitted into view and performed by hovering and then flicking back into the bushes. A party of LONG-TAILED TITS fed above us, whilst a male BULLFINCH fed on dead Rosebay Willowherb heads.

It was then across to the boating lake and here, a GREY WAGTAIL put on a good show on the water’s edge and at the northern end of the lake, the wintering WHOOPER SWAN showed well. During our walk back we added COAL TIT, REDWING and SONG THRUSH to our ever- growing list.

We left the site and had quite a drive to Bodmin Moor, but soon after arriving at Dozmary Pool we wandered down the track and had fine views of the male LESSER SCAUP that was seen in the company of TEAL, TUFTED DUCK and GOLDENEYE. Whilst here a male STONECHAT showed in front of us taking advantage of the shelter from the cold northerly wind that was cutting across the moor.

After picking up lunch, a visit was made to the Gannel Estuary at Newquay, where two female American Wigeon had been reported. Despite an incredibly thorough search, we couldn't locate any ducks at all which was so frustrating!

We cut our losses and drove down to Falmouth, where a 1st winter drake LONG-TAILED DUCK was seen at Swanpool. Other species here included an adult MEDITERRANEAN GULL plus a GREAT NORTHERN DIVER in the bay.

Our last port of call for the day was the fishing village of Coverack, where we immediately spotted a GLAUCOUS GULL out in the bay with hundreds of GREAT BLACK-BACKED & HERRING GULLS, which were taking advantage of discarded Dogfish in the harbour.

We strolled round towards the harbour and soon had four different GLAUCOUS GULLS in view at the same time. These magnificent birds from the Arctic put on quite a show, as did a large number of GANNET that were feeding offshore.

With the light going we headed back to base and after a quick turnaround, got a taxi into Helston to visit the Blue Anchor public house where they have been brewing beer for over 600 years! We sampled a few of these before heading back for dinner which was very welcome after a long day out in the field.


Tuesday 27th January 2015
After breakfast we said our goodbyes to Helston and drove to Penzance for another attempt to see the Pacific Diver. The conditions were perfect on our arrival with little wind and overcast skies, making viewing ideal. Our first sweep of the bay produced the obligatory GREAT NORTHERN DIVERS in good numbers and then another diver was picked out south of Long Rock.

Getting the scope on it, alarm bells rang and zooming up to 60x there appeared to be all the features associated with PACIFIC DIVER! After watching it preen for around 15 minutes, it dived and never appeared again. This was very much in keeping with the behaviour of the Pacific Diver as mentioned to us by quite a few local birders and may have been the reason why we had been so close to seeing it on Sunday, as it showed then dived, never to be seen again that day!

EIDER and COMMON SCOTER were also seen and a small flock of DUNLIN flew west across the bay. Delighted with our birding so far, we headed over to Hayle for a visit to Philps Pasty Shop, with a plan to get pasties for lunch.

We then returned to Newquay to try again for the reported American Wigeon on the Gannel Estuary. With tidal conditions perfect, it was a huge surprise to find not a single duck present yet again and with time against us we searched for around 20 minutes which did produce a couple of GREENSHANK plus a SPARROWHAWK which flew across the valley being mobbed by a CARRION CROW.

We left the area and started our long drive home towards Essex. As we neared Exeter, a report of Penduline Tits came through at Darts Farm, Topsham and with it being so close to the main road it would have been rude not to pop in and see them!

After a bit of wrong turning during the walk, we eventually joined a small crowd overlooking a reed-fringed lake and there in front of us were two stunning PENDULINE TITS. We had brilliant views as they feed on bulrushes, ripping seeds from their fluffy heads.

Other species here included STONECHAT, CHIFFCHAFF, RAVEN and a large flock of BRENT GEESE that apparently contained a Black Brant but although we saw the goose flock in flight, we didn't see anything that looked like the brant.

After lunch we continued back to the motorway, but a serious accident had closed part of the M5 so we were forced to take a number of back roads to join the A303. There were plenty of COMMON BUZZARDS seen during our journey plus both RED-LEGGED and GREY PARTRIDGE.

The traffic was pretty bad around the M25 so we didn't arrive back until mid-evening, after what had been a fantastic tour with lots of good birds, good company and fun!
Next
Previous