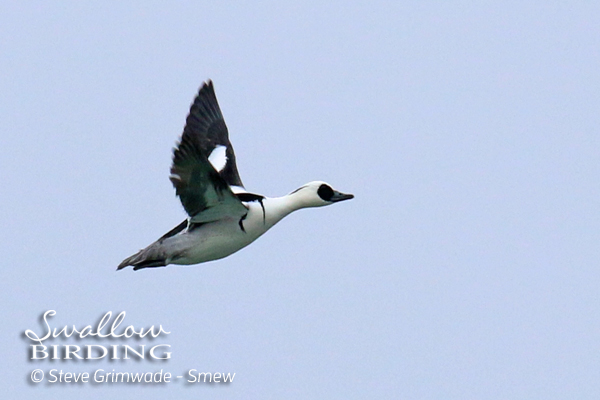 We met for a 7.45am start from West Mersea and although it was just getting light, we noted good numbers of LITTLE GREBES and DARK-BELLIED BRENT GEESE in the Mersea channel. A small party of BAR-TAILED GODWIT roosted on a muddy bank and included one bird in summer plumage.

In Salcott Channel we encountered our first GOLDENEYE and RED-BREASTED MERGANSERS and close to Abbott's Hall, a flock of 19 BARNACLE GEESE were seen on the saltings. Whilst watching them, a PEREGRINE came in overhead scattering large numbers of GOLDEN PLOVER before it landed in a dead tree overlooking the Abbott's Hall breach.

A few MARSH HARRIERS were noted over Old Hall Marshes and as we turned back into the Blackwater, suddenly they were joined by a SHORT-EARED OWL quickly followed by another two! Soon after this we located a GREAT NORTHERN DIVER mid river before we carried on westwards.

A female COMMON SCOTER flew past the boat as we neared Goldhanger and another GREAT NORTHERN DIVER was seen close inshore, but apart from the usual wildfowl and waders it was rather quiet. Checking out the southern side of Osea Island produced a large flock of around 35 RED-BREASTED MERGANSER, plus a few CORMORANTS taking advantage of big shoals of Sprats in the river.

Moving over to the north shore of the river proved a good move, with a single SLAVONIAN GREBE and a couple more MARSH HARRIERS. With some time spare, we tried Salcott Channel again and this time there were more RED-BREASTED MERGANSER, GOLDENEYE and a stunning drake SMEW that gave good views as it flew past the boat several times.

It was then time to head back into West Mersea after what had been a superb trip, with some good birds seen despite the bitterly cold weather.
Next
Previous