WINTER BIRDING ON THE ISLE OF SHEPPEY
Sunday 1st February 2015 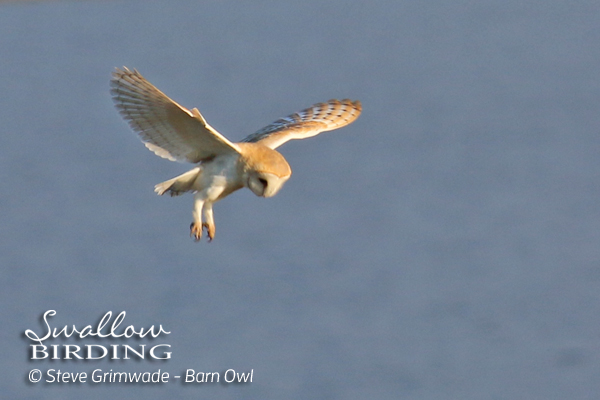 With a bitterly wind forecast for north Kent we knew it would be bracing to say the least and we were not disappointed, as for once the forecasters were right!

Our first port of call was Leysdown where we picked out a fine adult MEDITERRANEAN GULL amongst COMMON, HERRING and BLACK-HEADED GULLS before we took a slow drive south towards Shellness. There we found STONECHAT, BRENT GEESE, REDSHANK, CURLEW and OYSTERCATCHERS feeding on the flooded fields.

At the far end we headed out along the sea wall and at times the wind almost blew us off our feet, but this didn't stop us from locating the wintering RICHARD'S PIPIT in the long grass. It then flew off and disappeared close to a clump of reeds. With conditions not too good we opted to view from the beach, which saw us find small numbers of TURNSTONE and a few SANDERLING.

As we strolled back to the carpark, a cracking male HEN HARRIER flew low over the saltmarsh before disappearing over the sea wall. After another look for the Richard's Pipit which was unsuccessful, we walked to the hide overlooking the Swale Nature Reserve.

A HOODED CROW was seen out on the marsh and a scan of the area produced WHITE-FRONTED GOOSE, COMMON BUZZARDS, MARSH HARRIERS, STONECHAT, BEARDED TIT plus good numbers of waders that included REDSHANK, GREY PLOVER, KNOT, DUNLIN and BAR-TAILED GODWIT including a leucistic bird.

It was then back to the van for a drive round to Elmley Reserve and whilst driving we found a large flock of around 1000 BLACK-TAILED GODWIT plus WIGEON, TEAL, MARSH HARRIER, LAPWING, CURLEW, REDSHANK and GOLDEN PLOVER.

After a very welcome lunch break we spent the afternoon along the Harty Ferry road, where MARSH HARRIERS were very much in evidence, plus a small flock of CORN BUNTING. With the wind still biting we drove up to Harty Church where we got some shelter but not a lot! GOLDCREST and COMMON BUZZARD were noted but it was rather quiet, so we rounded off the day at the raptor viewpoint. Within a few seconds of getting out of the van we were treated to views of a hunting BARN OWL.

After leaving the site for our journey home we had superb views of another BARN OWL just 10 feet away as it sat on the edge of a ditch, plus a little further on another BARN OWL which flew past. Just as we were about to cross the Sheppey bridge, yet another BARN OWL was seen, rounding off an excellent day in Kent!
Next
Previous