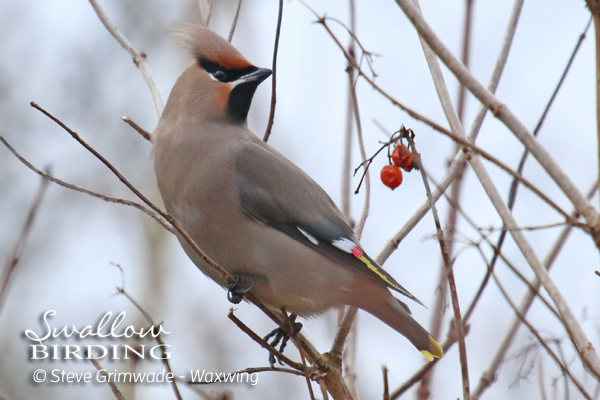 We started the day off with a visit to Kesgrave in Ipswich to find a flock of Waxwings that have been frequenting an area close to a primary school. Despite a wander around we could only muster a small flock of GOLDFINCH and lots of STARLINGS! We headed back to the van but just as we were about to leave, Steve spotted a small flock of WAXWINGS that flew into trees close to the school!

Quickly getting out, we strolled down to the trees and had fantastic views of these beautiful birds as they gorged themselves on berries before flying back up to trees to preen.

Heading north we made a stop close to the A12 where 22 BEWICK’S SWANS were seen feeding at the back of a field, along with good numbers of SHELDUCK and COMMON GULL. Beccles Quay was our next destination and we quickly located a female SCAUP on the river before she swam away towards the town.

A visit to Ellough was made where we scanned the large flocks of gulls in search of a Glaucous Gull that had been seen intermittently recently but to no avail.

Stopping off at Ness Point, Lowestoft we didn’t take long to find the wintering flock of PURPLE SANDPIPER that showed really well and numbered 11 birds. Whilst here we found a fine adult MEDITERRANEAN GULL that flew over us.

It was then down to Westleton Heath for a spot of lunch and afterwards we took a walk up onto the heath where we saw at least one DARTFORD WARBLER, although they were keeping low due to the cold wind. We flushed a SNIPE sp. from the path that may well have been a JACK SNIPE.

We finished the day at Minsmere RSPB Reserve where a walk was taken to Island Mere Hide which produced great views of a couple of COMMON SNIPE, SISKIN, MARSH HARRIERS and SPARROWHAWK, but despite the calm conditions it was rather quiet.

Wandering back we had good views of MARSH TITS, TREECREEPER, GREAT SPOTTED WOODPECKER and a MUNTJAC. After a hot drink we visited Bittern Hide where Geoff spotted a cracking male HEN HARRIER flying over the reeds towards Island Mere. Steve saw a BITTERN briefly and a SPARROWHAWK landed on the path.

A last stop at Eastbridge produced a couple of COMMON SNIPE flying over us in the near dark which finished the day nicely.
Next
Previous