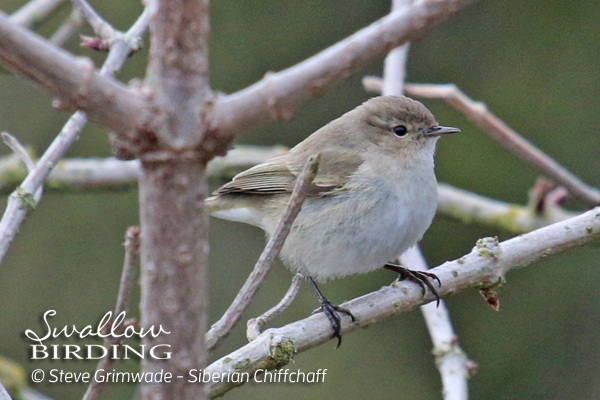 Friday 20th February
We left our base bright and early for our journey down to Dorset. After making our pickups we breezed around the M25 and were soon onto the M3. After a break at Fleet services we headed southwest and it wasn’t long before we picked up a RED KITE soaring over the woodland bordering the M3. The rest of the journey produced two very close COMMON BUZZARDS that were perched on roadside signs.

Our first site was the sheltered cove of Middle Beach on the Studland Peninsula. The calm conditions made it quite easy to pick out the birds on the water. Our scan of the bay produced around three BLACK-NECKED GREBES which were moulting nicely into summer plumage and further out we found a female LONG-TAILED DUCK which kept two GREAT CRESTED GREBES company!

It was then time for lunch which we tucked into in the carpark before making our way along the Studland peninsula where we stopped at a hide overlooking Brands Bay. The tide was receding very slowly and the islands and bays were home to good numbers of wildfowl and waders.

PINTAIL were very numerous and included some stunning males along with WIGEON, TEAL, SHOVELER, RED-BREASTED MERGANSER and a couple of GOLDENEYE which made quite a sight! Up to three SPOONBILL were seen including a colour-ringed bird and waders included BLACK-TAILED GODWIT, CURLEW, GREENSHANK, REDSHANK, DUNLIN and TURNSTONE.

We then took the chain ferry across to Sandbanks and made a very brief stop to check for Purple Sandpiper but unfortunately the tide was too high to gain access to the beach.

Moving round the harbour, we came across a large flock of BAR-TAILED GODWIT which were flushed as we arrived plus a small flock of BRENT GEESE.

From here we drove to a nearby retail park, behind which outflow from the local sewage works ran and it was home to quite a few birds.

The most numerous species was the COMMON CHIFFCHAFF with at least 15 birds seen but the real stars were at least two SIBERIAN CHIFFCHAFF which showed very well and one was heard calling a couple of times to clinch definite ID!

GOLDCREST, GREY WAGTAIL, LONG-TAILED TITS and a few common passerines were seen here but despite scanning, we couldn't locate the recently present Firecrest.

It was then off to our accommodation overlooking Poole Harbour where we parked up and then took a walk along the cycle track bordering the open water. Once we had found the right pathway we had splendid views of waders and wildfowl feeding at low tide.

The best of the birds were a SPOTTED REDSHANK and COMMON SANDPIPER which was seen at the western end of the outfall drain that we had visited earlier. All the birds were quite used to cyclists, joggers and birders being nearby so were very tame allowing good photos to be taken.

After a stroll back we checked in and had some time to relax before meeting for our evening meal which was excellent.

Saturday 21st February
After a good breakfast we popped into a local supermarket to pick up lunch before heading off to Morden Bog NNR. As we got out of the van, a GREAT SPOTTED WOODPECKER flew over and several COAL TITS could be heard singing.

We walked around the Heath and eventually located our quarry, a pair of fine DARTFORD WARBLERS that flitted around the gorse and heather silently. A few MEADOW PIPITS were seen but it was rather quiet given the sun and clear blue skies.

During our time here we searched for a Great Grey Shrike that had recently been seen but despite a good search, we didn't manage to find it!

The walk back through the woodland gave us good views of a TREECREEPER plus several flyover SISKIN. As the weather warmed up several COMMON BUZZARD took to the air plus a single RAVEN which flew over us. Along the river we found a pair of GREY WAGTAIL plus REDWING, MISTLE THRUSH and a few CHAFFINCH.

It was then off to Arne RSPB Reserve which was very busy on our arrival and we had to use the overflow carpark! We enjoyed a hot drink whilst watching the feeders where NUTHATCH, COAL TITS and other common species took advantage of free food.

After lunch which we had in the sunshine, we made our way out onto the Heath, but again it was rather quiet except for two male SIKA DEER locking antlers, plus GOLDCREST and LONG-TAILED TIT.

We reached the hide overlooking Middlebere Lake where the tide was going out, leaving a vast area of exposed mud. AVOCETS, BLACK-TAILED GODWITS, DUNLIN, REDSHANK and CURLEW plus lots of duck were seen and with careful scanning, we found an adult YELLOW-LEGGED GULL at the far end of the bay.

There were several showers during our time in the hide and this gave us the chance to grill everything as we sheltered. Up to five SPOONBILL were seen including one that fed just below the hide. A PEREGRINE went through scattering all the waders but just carried on northwards. Another look through the waders found us a single KNOT and quite a few DARK-BELLIED BRENT GEESE were seen.

The walk back to the carpark didn't take long and with some time spare, we made the decision to head down to nearby Kimmeridge to find three Great Bustard which had been seen in the area.

Despite a good search we couldn't locate these birds but we did see several KESTREL plus 6 COMMON BUZZARD including five together.

It was then back to base for a shower before meeting to do the birdlist and enjoy our evening meal.

Sunday 22nd February
We awoke to find clear, bright and icy conditions and after a hearty breakfast we revisited the drainage ditch adjacent to Hole's Bay. Almost immediately we picked out the SIBERIAN CHIFFCHAFF, quickly followed by a few COMMON CHIFFCHAFF and GOLDCREST but still no sign of the Firecrest.

With poor weather forecast later in the day, we made the decision to head down to Portland where there had been some good species in recent days.

Down at Portland Bill, the weather was quite different to how the day started with strong winds and wild seas! ROCK PIPITS were very numerous as they fed on the open grassy fields and a scan of the rocks produced a small mixed flock of PURPLE SANDPIPER and TURNSTONE.

Using the obelisk as shelter we had a brief seawatch with binoculars only and this proved fruitful with sightings of COMMON SCOTER, GANNET, FULMAR, GUILLEMOT, RAZORBILL and SHAG.

By now it had started to rain with the odd spot so we made our way northwards to Portland Castle, where using the shelter of the walls it was quite pleasant.

It didn't take us long to find the moulting adult BLACK GUILLEMOT that was seen perched on a buoy preening before swimming off. RED-BREASTED MERGANSER were numerous but despite offering shelter from the storm, the harbour remained quiet.

By now rain was falling steadily, so nearby Ferrybridge was an obvious choice as we hoped to get shelter from the rain and wind next to the visitor centre.

The most common species here was MEDITERRANEAN GULL with an estimated 200 birds which was simply delightful! A PALE-BELLIED BRENT GOOSE was picked out amongst a flock of DARK-BELLIED BRENT GEESE before they were flushed by a dog walker.

Other species of note included RED-BREASTED MERGANSER and DUNLIN. It was then off to have lunch and get some respite from the inclement weather and to warm up and dry off.

With the weather set in, we made our way homewards and after dropping Ian off in Bournemouth we headed east. A quick stop was made in the New Forest where we saw around 12 MANDARIN DUCK.

The rest of the journey was quite horrendous with poor weather and traffic problems not helping at all. We arrived back later than planned after what had been a great weekend!
Next
Previous