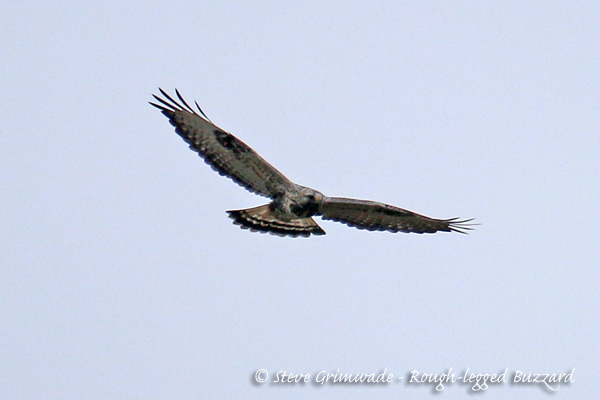 We started the day off in Lowestoft where we made an unsuccessful attempt to connect with a Glaucous Gull that was previously seen on the seafront. Despite a good search, we had great views of several KITTIWAKES that appeared to be back at nesting sites.

From here we made the short journey up to Ness Point where an adult MEDITERRANEAN GULL flew past, plus 11 PURPLE SANDPIPERS fed right in front of us. ROCK PIPITS flitted along the seafront and gave good views.
After a toilet break near Lake Lothing we found a Norwegian rung BLACK-HEADED GULL before heading over to Waveney Forest.

COAL TITS were common in the woodland and on reaching the viewing mound it was rather windy and the marsh seemed devoid of life, although a thorough search yielded a COMMON BUZZARD plus several MARSH HARRIERS. Just when we were thinking about giving up, Steve picked up a raptor coming head-on which suspiciously looked like a Rough-legged Buzzard. When it turned it did prove to be a cracking ROUGH-LEGGED BUZZARD although it quickly disappeared behind trees!

Whilst searching for a better viewpoint, we flushed a BARN OWL from conifers and on reaching an open point we disturbed the ROUGH-LEGGED BUZZARD from trees close to us and it gave brilliant views before disappearing over the marsh.

Leaving the area we made a brief stop at Halvergate Marshes. It was very windy here and unsurprisingly we couldn’t find any raptors. Moving off and heading back along the road, we came across another ROUGH-LEGGED BUZZARD hovering close by. On the edge of Great Yarmouth we came across a SHORT-EARED OWL that unfortunately had been a road casualty!

It was then off to the Broads where a tour of the coast road provided us with a mixed flock of PINK-FOOTED and WHITE-FRONTED GEESE plus lots of FIELDFARE.

Arriving at Stubbs Mill slightly later than planned it was a surprise not to find anyone there! Despite drizzle and a brisk wind, we saw a pair of COMMON CRANES that flew right in front of us plus ringtail HEN HARRIER, 15 MARSH HARRIERS, SPARROWHAWK, CHINESE WATER DEER and a close flock of LONG-TAILED TITS which concluded a very good day!
Next
Previous