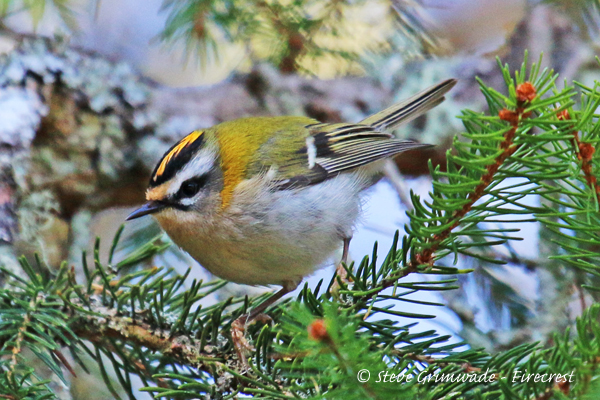 Friday 10th
Our tour started in Basildon at 8.00am and once we had taken a back road being expertly guided by Sheila we joined the M25 and started our journey down towards Hampshire. After a coffee stop at Fleet Services we unfortunately got stuck in traffic close to Winchester, but this enabled us to see LESSER CELANDINE, COWSLIPS, PRIMROSES and DANISH SCURVY GRASS growing on the central reservations.

We arrived at Acres Down in good time and took a walk to the top of the hill where the first bird we saw was a singing male WILLOW WARBLER. A pair of COMMON BUZZARDS drifted up and circled around before flying off into the haze created by high levels of pollution.

A stunning male STONECHAT perched high on top of a Birch and quite a few SISKINS flew over. BRIMSTONES fluttered by but there was no sign of any Goshawks.

It was back down to the van for a spot of lunch which we enjoyed in the sunshine before Steve found a male FIRECREST in the carpark that flitted around for all to enjoy!

Afterwards we took a stroll through the woodland and once again noted the FIRECREST and an obliging GOLDCREST which joined it for a good comparison between the species. Further along we had good views of up to three GREAT SPOTTED WOODPECKERS that were displaying and drumming plus CHIFFCHAFF, COAL TIT and yet more flyover SISKINS plus two brief HAWFINCH that unfortunately only Steve saw.

We returned to the van and drove the short distance to the New Forest Reptile Centre where we had a chance to see some of the UK's reptiles up close. During our visit we managed to see NATTERJACK TOAD, COMMON FROG, COMMON LIZARD, SAND LIZARD and ADDER.

Apart from the reptiles we watched NUTHATCH, GREENFINCH, SISKIN, GOLDFINCH and lots if CHAFFINCHES on the bird feeders close to the RSPB information hut.

With time getting on, we headed towards our hotel in Burley but couldn't resist stopping off in an area of heathland to see Dartford Warbler but despite a good look we couldn't see any. We did manage to find a pair of LAPWING plus up to three COMMON BUZZARDS circling over the woods.

We arrived at the hotel and once we had completed the rigours of checking in, had some time to relax before meeting for our evening meal which was very good indeed. Once suitably full, we rounded off the day in the lounge where we completed the bird list.


Saturday 11th
We met for breakfast at 8.00am which was quite a leisurely affair as it was raining outside! Once full, we met a short time later and took the short drive to Blashford Lakes HWT Reserve.

The first part of the morning was spent in the southern part of the reserve which started with excellent views of a NUTHATCH on the feeders adjacent to the visitor centre. We spent time in the woodland hide where a couple of BANK VOLES entertained as they dashed backwards and forwards from cover. Apart from the usual woodland species it was rather quiet so we wandered along the path to Ivy Lake which held GREAT CRESTED GREBES, GADWALL, BLACK-HEADED GULLS, CORMORANTS, TUFTED DUCKS and COOTS.

Several COMMON BUZZARDS took advantage of the nice weather and could be seen circling over the reserve. A male BLACKCAP showed well as it sang from bare branches at the northern end of Ivy Lake but birds from the other hide were rather disappointing.

GREEN WOODPECKERS were very much in evidence around the carpark as we walked past on our way to the Tern Hide which overlooks Ibsley Water. Despite a cool wind we stayed for a while in the hide which was rather productive. At least two COMMON TERNS were seen flying over the water along with 6 LITTLE GULLS which could be picked out amongst the many BLACK-HEADED GULLS that were feeding on the hatching midges.

A good flock of EGYPTIAN GEESE were seen along with other species that included REDSHANK, LAPWING, SHOVELER, TEAL plus LESSER BLACK-BACKED GULL, GREAT BLACK-BACKED GULL and HERRING GULL on the same island.

By now our stomachs were rumbling so we wandered back to the visitor centre where we had lunch in the warm sunshine. Whilst having our lunch, a fine pair of adult MEDITERRANEAN GULLS flew over calling which was a nice bonus.

Afterwards we took a short drive over to Ibsley Water Meadows where we found a pair of SHELDUCK on a small pool and the meadows were awash with MARSH MARIGOLDS and LADIES SMOCK.

The remainder of the afternoon was spent at Eyeworth Pond. As we walked down the hill we could hear a CUCKOO calling nearby. At the pond we found up to 6 fine MANDARIN DUCKS, several of which glowed in the afternoon sunshine. Further along the track we were entertained by a couple of TREECREEPERS plus we had brief views of MARSH TIT.

The real stars of the show here were two male COMMON REDSTARTS that flitted around an open area on the Heath and really brightened up the afternoon.

Whilst Steve went back to get the van along with a few of the group, the remainder saw three SWALLOWS flying over plus a pair of MUSCOVY DUCK and a male BLACKCAP.

We left the area and took a drive along an open area of Heath where a MEADOW PIPIT and a pair of STONECHATS were seen. It was then time to make the twenty minute journey back to the hotel where we had time for a wash and brush up before our evening meal.


Sunday 12th
We awoke to find lovely bright and sunny conditions and although a little chilly at first it soon started to warm up, especially if you were out of the wind. After breakfast, our first port of call was to a nearby site where the previous day, an observer had reported over 12 Hawfinch.

We set up in the middle of a clearing but despite a good search, saw very few birds apart from SISKINS, CHAFFINCH and GOLDCRESTS. Taking a walk northwards through the woods we found a small party of STOCK DOVES but best of all, several singing male FIRECRESTS!

These tiny birds really put on a show for us and appeared to be quite common in this area. Retracing our steps, we once again spent time back in the Arboretum which apart from even more FIRECRESTS was very quiet indeed.

We headed back to the hotel to pick Janet up, who unfortunately was feeling a little poorly earlier in the morning but it was great to see her up and about on our arrival. Heading off back into the forest we pulled into a carpark and next to the van was a female DARTFORD WARBLER! It unfortunately disappeared from view so we carried on and had lunch, managing to find some shelter from the strong, cool breeze that was blowing.

Whilst here, several SWALLOWS flew over and a pair of COMMON BUZZARDS drifted past in the distance. We tried once again for the Dartford Warblers and Pam and Alan got brief views of a male DARTFORD WARBLER perched on a gorse bush. Despite standing for a while, there was no further sign so we tried another nearby spot but the habitat and weather wasn't quite right, so we went back to the original spot and lo and behold we had distant but prolonged views of a male DARTFORD WARBLER sitting on top of heather.

After this we needed a break so down to Bolderwood we headed for an Ice Cream and a chance to see the herd of FALLOW DEER that occur there. It was very busy with people enjoying the afternoon sun so we didn't stay too long.

Our last site of the day wasn't too far away and we took a walk along a ridge where we noted STONECHATS on the gorse and a little further on we watched two male COMMON REDSTARTS chasing each other around at the bottom of the valley. Two WOODLARKS flew over our heads and on the other side of the wood we found a few MEADOW PIPITS plus a single LAPWING.

It was then time to head back to the hotel for a rest before meeting for dinner which once again went down very well indeed!


Monday 13th
After breakfast, we said our goodbyes to the hotel and headed south to Keyhaven Marshes. A CURLEW foraged in a nearby field and on the adjacent lagoon we watched a small number of summer-plumaged BLACK-TAILED GODWIT and PINTAIL feeding in the shallow water.

On the seaward side of the river we watched LITTLE EGRET, TURNSTONE, REDSHANK and lots of BLACK-HEADED GULLS moving to and fro from their nesting colony on the saltmarsh. The nearby scrub held good numbers of LINNETS and we had great views of a pair of DARTFORD WARBLERS, especially the male who was seen preening in brambles for a long time. If only it had been that easy the previous day!

A few BRENT GEESE frequented the shoreline along with several pairs of OYSTERCATCHER plus a distant pair of MEDITERRANEAN GULLS which flew over. We reached a large lagoon which held a single male WIGEON plus TEAL, SHOVELER, SHELDUCK, MALLARD and in the reedy margins we watched a REDSHANK alongside a SPOTTED REDSHANK.

A scan in the distance revealed 12 COMMON BUZZARDS circling overhead, plus whilst watching these we had good views of a male DARTFORD WARBLER, performing song flights and singing from on top of the many gorse bushes.

At the final lagoon the water was much lower, creating muddy margins and here we watched COMMON SNIPE, REDSHANK, three male and two female RUFF, a pair of LITTLE RINGED PLOVER and three WHIMBREL that flew across the saltmarsh calling.

It was then a good walk back along the ancient highway with some good birds along the way including singing REED WARBLER plus CHIFFCHAFF, REED BUNTINGS, CHAFFINCHES and a large female PEREGRINE and KESTREL.

Back in the village we enjoyed lunch whilst sitting overlooking the Isle of Wight, with TURNSTONES and BLACK-HEADED GULLS for company.

With some reservation we started our journey home back towards Essex, but due to an accident near the M23 we arrived back around 75 minutes later than planned.

We arrived back in Basildon mid-evening after what had been a great tour with such a lovely group of people and with many laughs during the weekend!
Next
Previous