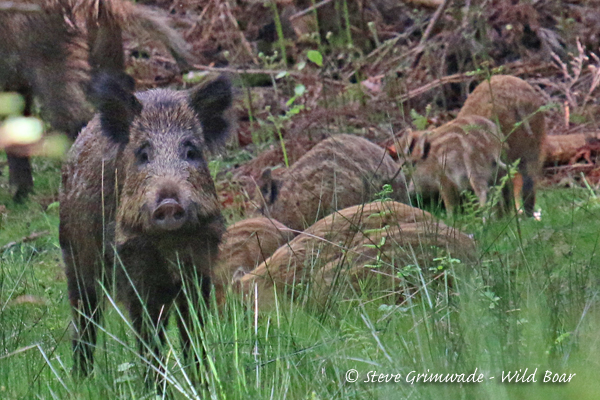 Saturday 2nd May
We left Essex and started our journey towards deepest, darkest Gloucestershire. On the M25, a CUCKOO flew north and as we drove along the M40 we watched good numbers of RED KITES plus COMMON BUZZARDS flying close to the motorway.

A COMMON SWIFT flew across the road as we carried on our journey through the Cotswolds before arriving at The Forest of Dean mid-morning.

Our first port of call was New Fancy View where lovely views of a singing male TREE PIPIT greeted us in the carpark. Several BLACKCAPS sang from the scrub and SISKINS could be heard flying over.

The viewpoint gave us magnificent views over the forest and a good scan produced a fine RED KITE, SPARROWHAWK and a few COMMON BUZZARDS.

It didn't take long before we found our main target, a male GOSHAWK displaying over the woods which was then joined by another male! The original male performed its display flight for quite a while and later was joined by a female who perched up in a tree.

It was then back down to the van for lunch and whilst here we saw a COMMON CROSSBILL fly over plus more BLACKCAPS were seen.

After a toilet stop, we visited Cannop Ponds where a fine SPOTTED FLYCATCHER was seen in lakeside trees and many SWALLOWS hawked over the surface of the lake. By now, a fine drizzle had set in but that didn't deter us and we had brief views of two KINGFISHERS plus three drake and a female MANDARIN DUCK.

A TREECREEPER and WILLOW WARBLER were noted in the woodland and a very obliging RAVEN was seen around the carpark. It was pretty chilly in the damp conditions so we enjoyed a hot drink before wandering back to the carpark. A GREY WAGTAIL was watched feeding under tree roots and as the wind dropped both SAND and HOUSE MARTINS flew down to feed over the lake.

We then moved on to a new site where we managed to find several FIRECREST, although seeing them in the high trees was a different matter as it produced several stiff necks in the process!

The day concluded with a visit to another nearby site where yet more FIRECRESTS were seen including some stunning singing males that brightened up a drizzly afternoon.

We then headed off towards our hotel and after checking in, we met for a pre-dinner drink and to complete the birdlist before having our evening meal which went down a treat!


Sunday 3rd May
The day started very damp with overnight rain clearing by the time we devoured our hearty breakfasts. After picking up lunch, we headed to the RSPB's Nagshead Reserve where the sun came out.

First we walked down to the Lower Hide and on the way we had good views of a singing male GARDEN WARBLER plus BLACKCAP, CHIFFCHAFF and a few common species.

Down near the hide we soon located a pair of PIED FLYCATCHER and although views were a little distant it was great to these summer migrants flitting around. From the hide, a KINGFISHER was seen briefly and a pair of GREY WAGTAILS foraged around the pond margins.

We then took a walk around the short trail where we found more PIED FLYCATCHERS which showed a lot better plus TREECREEPER, NUTHATCH and WILLOW WARBLER.

It was then back to the centre for a spot of lunch which was very enjoyable in the sunshine.

Afterwards, we took a walk around the long trail which was relatively quiet apart from a singing TREE PIPIT and a few BLACKCAPS. Our walk took us down to another area where after a tip-off we managed to see a family party of at least 10 WILD BOAR feeding in the undergrowth before they scampered off, never to be seen again!

This diversion took us quite a bit further than our intended walk but it was well worth it to see these great mammals. After a drink in the carpark we drove a short distance to a site where we soon located a pair of DIPPER that were obviously feeding young, as we could see they had bills full of food as they flew up and down the river.

Another bonus was that we found a cafe which stayed open so we could have a well-deserved cuppa or ice cream, but whilst enjoying this the rain started to fall so we called it a day and headed back to Ross-on-Wye for a shower to freshen up before meeting for our evening meal.


Monday 4th May
The day dawned bright and sunny as we had breakfast and after loading the van we were soon on our way to spend our last day in the forest. We pulled up at a new site and immediately could hear up to three singing male WOOD WARBLERS and eventually we had really good views of at least two plus a female that may have been building a nest!

These delightful birds really put on a show as they flitted from branch to branch uttering their trilling song. Other species here included BLACKCAP, SONG THRUSH, GREAT SPOTTED WOODPECKER and CHIFFCHAFF.

From here we drove to another new site where a superb GARDEN WARBLER was seen singing from a nearby bush before Steve could hear our next target, a singing male COMMON REDSTART. After a bit of searching we finally located it singing from tops of trees where its colours dazzled in the morning sunshine. NUTHATCHES and TREECREEPERS fed on the many Oaks whilst the GARDEN WARBLER sang in the background!

With time creeping away, we drove to Symonds Yat where the carpark was pretty busy with Bank Holiday visitors, but as we enjoyed a hot drink, overhead we watched three COMMON BUZZARDS and a female PEREGRINE soaring on thermals.

A short walk later we reached the viewpoint where a RED KITE drifted past and a male SPARROWHAWK flew below us. RAVEN, JACKDAW and quite a few a COMMON BUZZARDS kept us entertained before we spotted the female PEREGRINE returning, carrying a FERAL PIGEON. She landed on the cliff face and over the next twenty minutes, plucked and ate the pigeon before flying off to relieve the male from nest duties.

It was then back to the carpark for lunch before beginning our journey home. As we drove through Oxfordshire and Buckinghamshire we started counting RED KITES and ended up with a total of 62!

We arrived back in Essex early evening after a fantastic tour with lots of good birds, a great bunch of customers and great weather thrown in for good measure!
Next
Previous