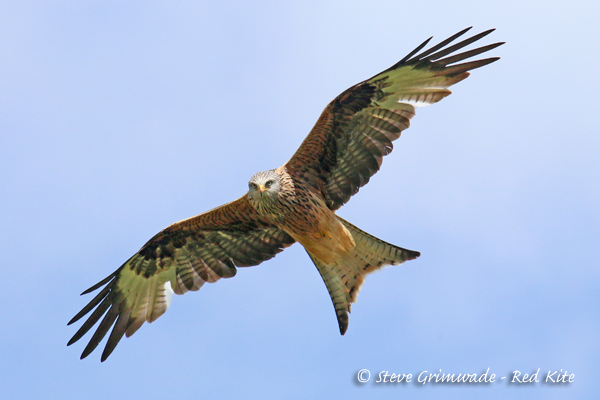 Thursday 28th May
We left Essex bright and early for our journey over to Wales. We began by trying to avoid several problems on the main roads and due to an M25 traffic jam, changed route and drove up the M40 noting a good flock of around 40 RED KITES in the air together!

After a stop for coffee/breakfast, we headed westwards and arrived in sunny Wales just after lunchtime. Our site for the afternoon was the RSPB Reserve of Gwynffrd-Dinas and we were greeted by several YELLOWHAMMERS on feeders plus a few HOUSE SPARROWS thrown in for good measure.

We took a slow walk along the boardwalk which allowed good views of several SPOTTED FLYCATCHERS and a couple of pairs of PIED FLYCATCHERS which were using the nest boxes around the reserve. As the boardwalk ended, we located a pair of COMMON REDSTART high in the canopy and could hear a singing WOOD WARBLER which remained very elusive on the wooded slopes.

With the wind blowing strongly, we tried another part of the wood which gave good views of another pair of COMMON REDSTARTS using a nest hole close to the path. Further along we could hear another WOOD WARBLER and this time we had a brief glimpse of it in the canopy before it moved further away.

More COMMON REDSTARTS and PIED FLYCATCHERS were seen as we walked the circular path around the reserve. The path started to get rocky and became more of an assault course to get along the paths, especially with the big boulders and a sheer drop down to the river! Other birds seen included a lovely TREE PIPIT which foraged around on the ground in front of us whilst TREECREEPER and NUTHATCH were seen also.

Eventually we came onto a flatter area which was quite a relief and whilst getting our breath back we checked out the river and found GREY WAGTAIL, DIPPER and COMMON SANDPIPER whilst a few RED KITES drifted overhead. It was then back to the van and a short drive later we arrived at our hotel, where after checking in we met in the bar for a drink and to complete the bird list before enjoying a great home-cooked meal.


Friday 29th May
We awoke to find heavy rain lashing down with heavy, leaden skies overhead. By the time we had eaten breakfast the rain had eased significantly and as we drove northwards it had almost stopped.

We arrived at Gilfach Farm in good time and after parking up, spent some time watching the feeders and birding around the courtyard. LESSER REDPOLL and SISKIN were seen on the Niger feeder and a male TREE PIPIT sang from overhead wires adjacent to the farm.

The real stars of the show were several COMMON REDSTARTS and PIED FLYCATCHERS that gave amazing views in and around the courtyard. Other birds seen included MARSH TIT, RAVEN, RED KITE and COMMON BUZZARD plus the usual woodland species.

With the weather now improving we took a walk around one of the trails, where COMMON REDSTARTS and PIED FLYCATCHERS were very numerous. At least three male WOOD WARBLERS trilled on the slopes but only one of the group managed to get on these elusive birds.

Ken did well to spot a TAWNY OWL flying through the trees and luckily it landed for us all to see, although it was a little obscured at times! It was then back to the visitor centre for a hot drink before wandering down to the Otter Hide.

A pair of DIPPER were seen on the river along with several GREY WAGTAIL plus LONG-TAILED TIT, a singing GARDEN WARBLER and singing CUCKOO.

We opted to leave the site and drive into the Elan Valley, where after a short walk we had brilliant views of at least three WOOD WARBLERS singing at eye level. As expected, there were also more COMMON REDSTART and PIED FLYCATCHER to the extent that we were almost ignoring them as they were so common!

It was then back for lunch and afterwards we headed to a part of river where a pair of MANDARIN DUCK were found, plus we enjoyed views of a singing male GARDEN WARBLER in the riverside bushes with plenty of GREY WAGTAIL.

With time getting on, we drove into Rhayader and to Gigrin Farm Red Kite Feeding Centre, where already there were quite a few RED KITES moving over the area. After a quick cuppa we wandered down to the hides and took our position ready for the 3pm feeding.

At 3pm the tractor came into the field and over the next hour or so we had the fantastic experience of around 300 RED KITES in the air together, putting on a real show. This number held at least three leucistic birds which were interesting to see.

COMMON BUZZARDS were seen in small numbers and other species included CARRION CROW, ROOK and a single RAVEN that was seen briefly.

After the feeding session, we headed back to the Elan Valley and visited another valley which held quite a few WHEATEAR, STONECHAT, RAVEN, COMMON REDSTART and both RED KITE and COMMON BUZZARD.

We arrived back at the hotel slightly later than planned and after a hot shower, once again enjoyed a lovely meal before retiring for the night.


Saturday 30th May
After another good breakfast we said our goodbyes to the hotel and began the three and a half hour journey north to Anglesey. The route took us through beautiful landscapes and with the sun shining, everything looked stunning!

We stopped off at Glaslyn Osprey Watch-point and found several RED-BREASTED MERGANSER on the river. From the viewing area we had distant views of a female OSPREY in flight, whilst the male fought off an intruding Osprey that was harassing the female. Eventually the intruder flew off and we had better views as it flew down the valley.

Tim took a walk to the railway bridge and found five male MANDARIN DUCK before we carried on northwards. The only bird of note during the journey was a female GOOSANDER asleep on a boulder mid-river close to Bedgellert.

We arrived on Anglesey almost on time and headed straight to the RSPB Reserve at South Stack where we had lunch in the van. Afterwards we took a stroll down to the cliffs where we quickly found some of our main targets including the delightful CHOUGH.

The cliffs were alive with GUILLEMOTS, RAZORBILLS, KITTIWAKES, FULMAR plus quite a few PUFFINS that were seen bobbing about on the sea. GANNETS and MANX SHEARWATERS passed by inshore and a pair of PEREGRINES put on a show above us as they harassed the local HERRING GULLS.

With a cold wind blowing we retraced our steps to check out the scrub along the road. Most small birds were keeping low although we did find ROCK PIPIT, DUNNOCK and STONECHAT.

We then returned to the van for the short drive into Holyhead to look for Black Guillemot. On our journey we stopped to check out a flooded pool which yielded GADWALL, GREYLAG GEESE and COOT!

We arrived in Holyhead Harbour to find a small group of SHAG just offshore, whilst a single bird was struggling to eat a Pipefish just off the jetty. Eventually we located around five BLACK GUILLEMOT although they were quite distant.

With some time spare we popped into Penhros Country Park where ARCTIC and SANDWICH TERNS were feeding and on the muddy edges of the estuary were DUNLIN, RINGED PLOVER, CURLEW and OYSTERCATCHER.

We rounded off the day at Valley Wetlands RSPB Reserve and although our visit was brief we still managed to find TUFTED DUCK, SAND MARTIN, REED and SEDGE WARBLERS, REED BUNTING, LINNET and WHITETHROAT which were all new birds for the tour.

It was then a short drive to the hotel where after checking in we once again had another mammoth meal before heading off to bed for the night.


Sunday 31st May
After overnight rain it was pretty breezy this morning on leaving the hotel, but at least the rain had passed through. We made our way to Cemlyn Bay Nature Reserve and took a walk along the shingle beach admiring a couple of TURNSTONE and RINGED PLOVER along the way.

The islands in the lagoon were alive with many SANDWICH TERN with smaller numbers of ARCTIC and COMMON TERNS thrown in for good measure. A scan through the BLACK-HEADED GULL colony produced a first-summer MEDITERRANEAN GULL whilst other birds on the lagoon included GADWALL, RED-BREASTED MERGANSER and lots of MALLARD.

With weather conditions far from ideal, we retraced our steps along the beach and found a sheltered spot, which produced good numbers of MANX SHEARWATER passing by along with FULMAR, KITTIWAKE and RAZORBILL. Around the carpark there were REDSHANK, WHEATEAR and nesting OYSTERCATCHER.

We left Anglesey and drove the short distance along the north Wales coast to the RSPB Reserve at Conwy. It was much sheltered here and from the hides we found our first MOORHEN and LITTLE EGRETS of the tour!

Large numbers of OYSTERCATCHER roosted at high tide and a female WIGEON was well found by Alan as it skulked along the reed edge. SAND MARTINS, HOUSE MARTINS, SWALLOWS and SWIFTS all fed low over the lagoons and a walk around the scrub yielded a pair of BULLFINCH, REED and SEDGE WARBLER, CHIFFCHAFF and GREENFINCH.

After a coffee in the cafe, we had lunch in the van before making our journey back towards Essex. Plenty of COMMON BUZZARDS were seen en-route and as we drove through Northamptonshire we found several RED KITES.

We arrived back early evening after what had been a great tour with all our of target species achieved and with lots of good food and good company!
Next
Previous