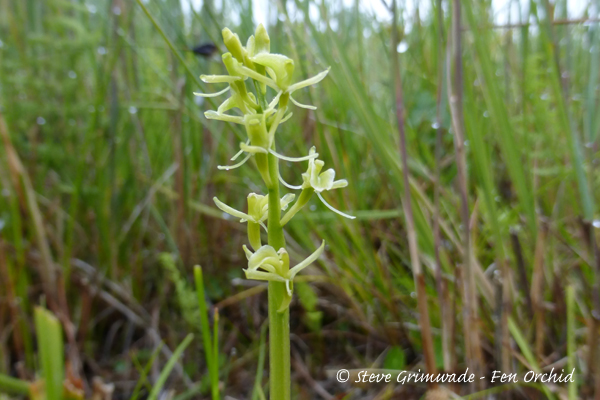 Well it wasn’t exactly a summer’s day with persistent rain pretty much throughout, but as usual we soldiered on and enjoyed the various wildlife on offer.

The day started at Strumpshaw Fen RPSB Reserve where we sheltered in the reception hide and had good views of KINGFISHER plus GADWALL. Outside a small group of BEE ORCHIDS were growing and with the rain stopping briefly we walked round to the Fen Hide. We hadn’t got far when the rain started again though and we got pretty wet!

Spending some time in the hide enabled us to have good views of MARSH HARRIER, BITTERN and BEARDED TIT plus SEDGE and REED WARBLERS. It was then back for lunch and a wander around the fantastic wildflower meadows where we found a few EARLY MARSH ORCHIDS plus WATER VOLE, MARSH LOUSEWORT and BARN OWL amongst others.

We then visited another site in the Broads and found the rare FEN ORCHID growing. Plenty of photographs were taken of this delicate orchid which only grows at a few places in the UK! A Four-spotted Chaser posed nicely as it sheltered from the rain.

With some time remaining we popped into Minsmere RSPB Reserve where we heard STONE CURLEW and in the Island Mere Hide we had views of HOBBY, MEDITERRANEAN GULL, BEARDED TIT, MARSH HARRIER and SPINELESS SI, the star of BBC TV’s Springwatch. I hadn’t seen Springwatch due to being busy with tours but I could now see what was so interesting about a stickleback!
Next
Previous