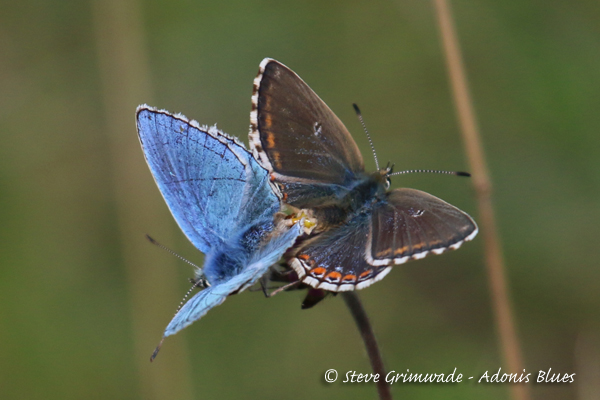 The weather started wet and drizzly as we left Essex but the forecast was spot on as we reached the outskirts of Dover, with the sun coming through the clouds and temperatures rising nicely.

One of the first butterflies we found was a superb CHALKHILL BLUE which posed well for photographs before we walked up onto the Chalk downland. The array of wildflowers was amazing with highlights being AUTUMN GENTIAN and AUTUMN LADIES-TRESSES.

A CLOUDED YELLOW flew past rapidly and we located more CHALKHILL BLUES, plus several stunning ADONIS BLUES and then our first SILVER-SPOTTED SKIPPERS of the day. The latter two species were very much on everyone’s target list and they certainly performed for us. Other butterflies included PAINTED LADY, LARGE WHITE, MEADOW BROWN and BROWN ARGUS.

With all our targets seen well, we drove westwards to the Dungeness area where lunch was on the agenda and had only just arrived when we looked up to see two HONEY BUZZARDS and a COMMON BUZZARD circling around. Unfortunately the two Honey Buzzards drifted off towards the power station. A pair of SPARROWHAWKS and a female MARSH HARRIER were also seen.

GOLDEN PLOVER, KNOT, RUFF, DUNLIN, COMMON SANDPIPER, BLACK-TAILED GODWIT and two WOOD SANDPIPERS were seen plus we had great views of a BITTERN perched in the reeds.

A walk around the entrance of the RSPB reserve produced a small party of WHINCHAT and a single WHEATEAR.

We spent some time at the beach overlooking the English Channel but apart from feeding SANDWICH TERNS and a few GANNETS it was rather quiet birdwise, although busy with humans as it was bank holiday weekend!

We concluded the day back on the RSPB reserve, where a party of seven WHEATEAR and a few WHINCHAT rounded off a superb day.