WHERE THE PAGER TAKES US - AUTUMN SPECIAL
Saturday 26th September 2015 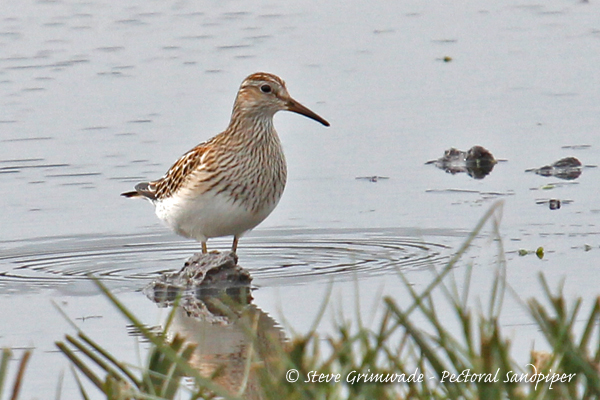 We started the day in our home county with a visit to the RSPB reserve at Vange Marsh. A GREY WAGTAIL flew over and was one of several seen during the day. After a short walk we were soon enjoying scope views of a WILSON'S PHALAROPE that was frequenting the main scrape. It was constantly feeding and occasionally drifted out of view but soon reappeared for us all!

With the sun now high in the sky we stopped off for a break and then made our way into Kent and to Ashford. We visited a new site that had only been open since May and here after a 20 minute walk we had scope views of a juvenile PECTORAL SANDPIPER feeding in a stubble field with two RUFF and many LAPWINGS. A couple of CHIFFCHAFFS frequented the Willows bordering the lake as we wandered back to the vehicle.

From here we spent the remainder of the day around Dungeness where a couple of GREAT WHITE EGRETS were seen roosting out on Burrowes Pit along with a few LITTLE EGRETS. A juvenile MARSH HARRIER disturbed a large mixed flock of GOLDEN PLOVER and LAPWING before we headed down to the Power Station for a seawatch.

Small numbers of SANDWICH TERN and a couple of COMMON TERN fed offshore but the best species were several ARCTIC SKUA, COMMON SCOTER, GANNET and lots of HARBOUR PORPOISE that were constantly on view.

A walk around the desert and trapping area only yielded a couple of CHIFFCHAFFS so we headed to the ARC pit where two BLACK-NECKED GREBES, PEREGRINE, MARSH HARRIER and KINGFISHER were best of the bunch.

The day concluded with tea and cake back at the visitor centre which rounded off an excellent day with birds a plenty!