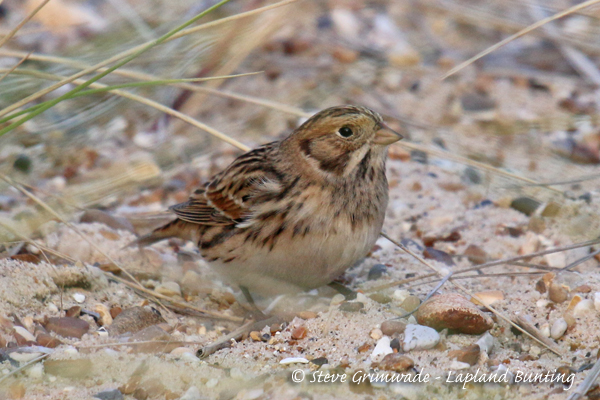 As the previous day, we started off at Landguard Point where we got off to a good start with seven SPOONBILLS flying south down the coast!

On the reserve we found quite a few REDWINGS which were seen moving along the ridge plus the usual GOLDCRESTS, CHIFFCHAFFS, BLACKCAPS and a late record of COMMON WHITETHROAT.

After a spot of breakfast we continued searching and had wonderful views of a female FIRECREST down to about three feet in a Hawthorn!

Eventually the bird flew off and we continued our walk around, noting up to three WHEATEAR on the common plus large numbers of GOLDCRESTS feeding on the ground at almost touching distance.

Thorpeness was our next destination and almost immediately we could hear YELLOW-BROWED WARBLER calling and Steve found one in a Sycamore whilst another bird was calling in a Sallow.

The latter bird showed reasonably well as it flitted around the tree and could be seen flycatching at the base of the tree. A GREY WAGTAIL flew over and both MARSH HARRIER and SPARROWHAWK were seen as we had lunch in the sunshine.

The remainder of the afternoon was spent at Gunton Warren where several WHEATEAR fed on the beach and at least five MEDITERRANEAN GULLS were seen either roosting or flying along the beach. Eventually we found several birders looking into the clumps of Marram Grass growing on the beach and over the next thirty minutes we had excellent views of a LAPLAND BUNTING which fed happily on seeds and could be seen creeping mouse-like through the vegetation, a fine end to the day!