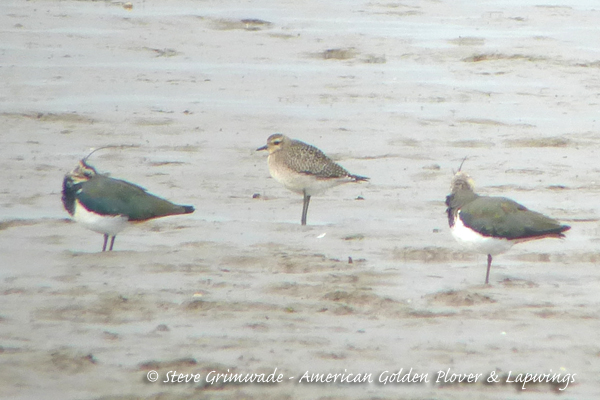 Our day started at Caister-on-Sea where along the beach and scrub bordering the golf course we had great views of a male SIBERIAN STONECHAT. This delightful bird really put on a good show for the group as it caught insects from the bushes.

Whilst watching this bird, several of us took a chance to look out to sea and noted BRENT GEESE, RED-THROATED DIVER, GREAT SKUA and a huge GREY SEAL colony.

From here we headed west to Strumpshaw Fen RSPB reserve and were greeted to flyover SISKINS and a MARSH TIT near to feeders. We wandered around to the Fen Hide where a GREAT GREY SHRIKE was on view but distant. Other birds seen here included a superb flyby BITTERN plus MARSH HARRIER and COMMON BUZZARD.

As we were about to leave, news came through of a possible American Golden Plover at nearby Breydon Water, so off we went and arrived at the site to find the AMERICAN GOLDEN PLOVER showing quite well with LAPWINGS on the foreshore. This was a great find by a local birder as there were many thousands of waders out on the mudflats, including several thousand GOLDEN PLOVER.

By now we were getting peckish so we had lunch in the carpark and then headed south back to Essex to Holland Haven, which gave us distant views of a juvenile ROUGH-LEGGED BUZZARD plus up to five SHORT-EARED OWLS. Several of these put on an amazing show as they flew past just a few feet away! A great end to a fantastic day of birding!