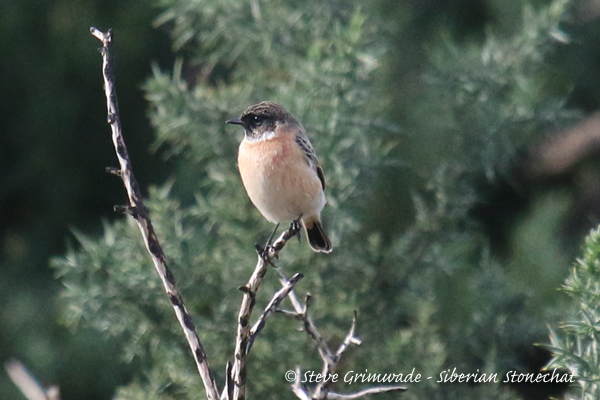 We all managed an extra hour of sleep this morning due to the clocks going back and we arrived at Caister-on-Sea to beautiful light, sunshine and no wind. A SHORT-EARED OWL was seen flying over the golf course as we wandered along the beach and it didn't take long before the male SIBERIAN STONECHAT was showing well right in front of us.

This recently split species put on a good show and we were able to see all of the salient features of this very distinctive bird.

After getting our fill, we headed north to Horsey where we wandered along the Nelson's Head track finding a lovely female HEN HARRIER quartering the fields. A little further on we noted MARSH HARRIER and out in the middle of the field sat a cracking GREAT GREY SHRIKE!

With the sun on our backs, we watched this bird catch several COMMON DARTER dragonflies which it quickly dispatched in one. Whilst scanning the area we found two SHORT-EARED OWLS, one of which conveniently sat on a fence post for us to scope it.

Up to five STONECHATS were seen in the fields plus MARSH HARRIER, KESTREL and a few SKYLARKS.

As we were close to the beach we took advantage of viewing the GREY SEAL colony but with so many people and dogs around whose behaviour left something to be desired we headed back for lunch.

As we tucked in, it was great to bump into many Essex birders and catch up, meanwhile news came through from Breydon Water that the AMERICAN GOLDEN PLOVER had been seen, so we wandered around to the river wall where it was again with the LAPWINGS and a few GOLDEN PLOVER.

Other species here included a fine adult YELLOW-LEGGED GULL plus up to five MEDITERRANEAN GULLS, BLACK-TAILED GODWIT and a large flock of around 2000 GOLDEN PLOVER.

Suddenly, all the birds took off and David spotted the culprit, a PEREGRINE heading through which made an attempt to catch a WIGEON but failed and carried on westwards.

With the light going, we dropped into Ness Point, Lowestoft where we immediately found two PURPLE SANDPIPERS on the sluice concluding a great day out!