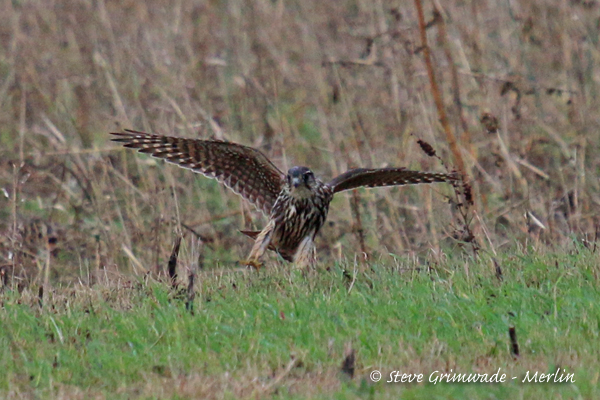 The day started wet and windy as we headed north through the flatlands of Cambridgeshire and Lincolnshire and by the time we reached Frampton Marsh RSPB reserve, the rain had eased.

A quick check into the visitor centre to see ‘what’s about’ and we headed off to the 360 degree hide. Good numbers of WIGEON and TEAL were seen on the flooded fields which were a little jumpy and then a juvenile female SPARROWHAWK zipped through sending the birds into a panic.

CURLEW, REDSHANK, a single KNOT and distant BLACK-TAILED GODWITS were also noted. A large flock of around 150 LINNETS bounced around along with a party of STARLINGS.

Unexpected were five WHOOPER SWANS that dropped in to wash and drink before flying off a little while later. A female MERLIN also caused havoc amongst the feeding birds as it zoomed through, but seemed content at just causing panic.

It was then back for lunch in the visitor centre where a few GOLDFINCH and GREENFINCH fed on the feeders. It was great to see the weather improving as we left the centre to visit the other hides.

Unfortunately, it started to rain again so we popped back into the 360 degree hide. The star of the show was once again the MERLIN that put on a real show and almost flew into the open hide at one point!

As we wandered along the paths we picked up nine WHOOPER SWANS coming in but they continued going, no doubt on their way down to Welney or Ouse Washes reserves. With the sun out we walked to the bank to scan the saltmarsh. Thousands of waders were wheeling around but very distant and a single MARSH HARRIER was seen.

The main concentrations were on the wet marsh where we found three SPOTTED REDSHANKS, DUNLIN, RINGED PLOVER, GOLDEN PLOVER, RUFF, BLACK-TAILED GODWIT, CURLEW, REDSHANK plus good numbers of ducks including a few GADWALL and PINTAIL.

We concluded the day back at the visitor centre where we enjoyed coffee and cake whilst a different SPARROWHAWK serenely glided off across the marsh, rounding off a great day.