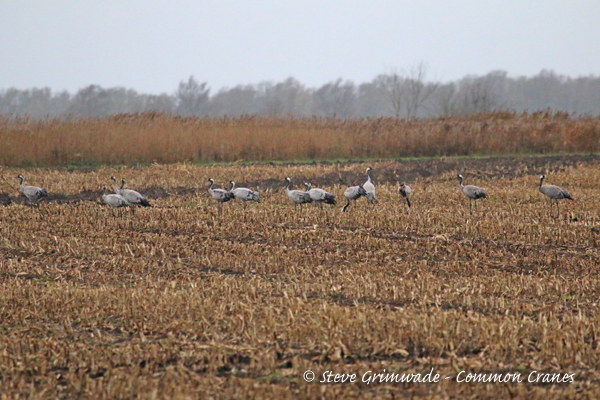 Our journey up to Cambridgeshire produced quite a few COMMON BUZZARDS along with KESTRELS, GOLDEN PLOVER and a flock of FIELDFARE.

We arrived at the Ouse Washes RSPB reserve and immediately heard TREE SPARROWS calling from the hedges. Down at the visitor centre we had excellent views of up to six TREE SPARROWS on the feeders until a SPARROWHAWK came from the rear of the centre and disturbed everything!

From the top path we found a male BRAMBLING plus LESSER REDPOLL in a small tree before wandering along the riverside path.

The first hide we visited produced several MARSH HARRIERS which disturbed thousands of WIGEON and TEAL with small numbers of PINTAIL, SHOVELER, MALLARD, GADWALL and TUFTED DUCK. Two groups of COMMON CRANES were a surprise out on the washes.

REDSHANK and SNIPE roosted on some of the dry islands where they gave good views.

Moving further north we stopped off in another hide where we saw a single WHOOPER SWAN along with a few MUTE SWANS. A male RUFF was spotted distantly before we started our walk back to the centre.
As we headed into the strong wind, a single BEWICK’S SWAN flew past calling and out in the fields were two more WHOOPER SWANS.

It was great to have lunch in the shelter of the centre from where we enjoyed stunning views of up to six BRAMBLING plus GREENFINCH, GOLDFINCH, CHAFFINCH, LESSER REDPOLL, HOUSE SPARROW and TREE SPARROWS.
After a good lunch we drove to a nearby spot which is normally good for wild swans but they were very distant as maize harvesting was taking place but we did have some compensation with 14 COMMON CRANES wandering across a nearby field!

We then headed over to Grafham Water where the wind was now strong and the light conditions poor. Highlights included a couple of GOOSANDER, two RED KITES, LITTLE EGRETS and lots of GREAT CRESTED GREBES. The cold conditions sent us into the café for a hot drink but when we came out the light had deteriorated and it was almost dark so after some cake back at the van we headed off home after a good day.