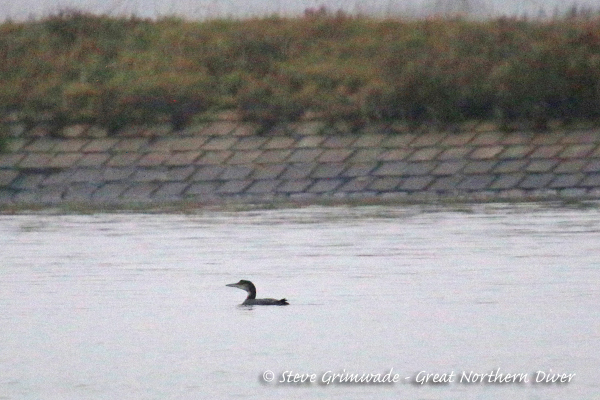 We all met on a damp and miserable morning at West Mersea for our last boat trip of 2015. As we motored south from the quay we noted several RED-BREASTED MERGANSERS, DUNLIN, BAR-TAILED GODWITS, LITTLE GREBES and BRENT GEESE.

With the tide rising, we swung round to enter Salcott Channel and there offshore was a fine inter-plumaged RED-THROATED DIVER that was seen on the water before flying eastwards. Good numbers of RED-BREASTED MERGANSER were present in the channel whilst WIGEON and TEAL roosted on the saltmarsh. A female MARSH HARRIER flew from Copt Hall over to Old Hall Marshes RSPB Reserve and a massive flock of GOLDEN PLOVER were put up in the air over the marshes.

With water levels rising, we managed to reach the breach at Abbott's Hall Farm and this yielded quite a few PINTAIL plus SHOVELER, SNIPE, GREY PLOVER, DUNLIN, LAPWING and more WIGEON. Our return trip out of the channel produced a female MERLIN perched up on the marsh before we moved round into nearby Tollesbury Channel.

One of the first birds we laid eyes on was a super GREAT NORTHERN DIVER that was fishing close to the sea wall. We cut the engines to drift a little nearer to this winter visitor to the River Blackwater.

A female SPARROWHAWK flew across the bow of the boat and further up the creek we found a small flock of AVOCET. More RED-BREASTED MERGANSERS were seen as we moved out of the channel.

Moving slowly along the north shore gave us the opportunity to see lots of roosting OYSTERCATCHERS plus wave after wave of KNOT flying over us. As we neared Rolls Farm, another GREAT NORTHERN DIVER was spotted, although more distant than the previous bird.

Visibility took a turn for the worse and this was rather unfortunate as an adult GANNET was spotted flying eastwards close to the south shore of the river but it soon disappeared into the murk.

We moved around Osea Island but apart from several GREAT CRESTED GREBES it was rather quiet. Back out on the main part of the river we eventually located a female COMMON SCOTER which gave good views as it bobbed about on the river. More unexpected was the adult LITTLE GULL that flew past the boat and carried on towards the direction of Osea Island.

With some time spare we looked into Tollesbury Channel as the tide was dropping and on Great Cobmarsh Island there were lots of roosting GREAT BLACK-BACKED and HERRING GULLS plus the odd LESSER BLACK-BACKED thrown in for good measure.

As we came into West Mersea, a BLACK BRANT was found feeding on the foreshore with around 15 BRENT GEESE which was the perfect end to the day!