WHERE THE PAGER TAKES US - WINTER SPECIAL
Saturday 9th January 2016 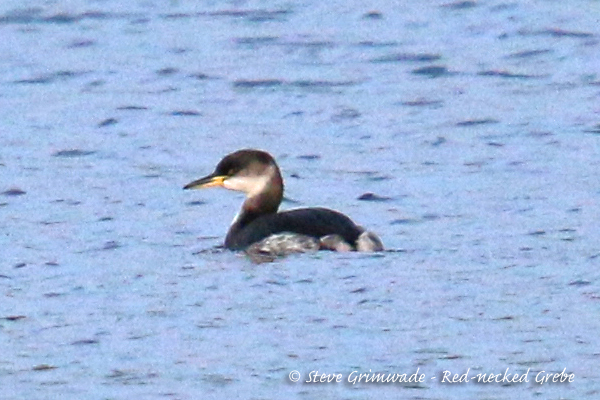 Our first day trip of the new year took us firstly to Alton Water where eventually we caught up with the long-staying adult RED-NECKED GREBE that showed reasonably well in a sheltered creek. A KINGFISHER zipped past and a mixed flock of LESSER REDPOLLS and SISKIN were in riverside trees and scrub.

We stopped off at Wherstead Strand and immediately picked out a male PEREGRINE perched on the Orwell Bridge, whilst on the river we found a GREAT NORTHERN DIVER and a couple of adult SHAGS.

With the weather nice and bright we headed north up the coast to North Warren RSPB reserve where the wet fields were alive with BARNACLE and WHITE-FRONTED GEESE plus flocks of BLACK-TAILED GODWITS. Popping in at Sizewell beach added LITTLE GULL and KITTIWAKE to our ever increasing day total.

It was getting on for lunchtime when we arrived in Lowestoft, so after a brief stop for refreshment we arrived at Ness Point to find breezy conditions and a very rough sea. A couple of ROCK PIPITS flew over and we located several PURPLE SANDPIPERS on the rocks. An adult MEDITERRANEAN GULL was seen following a survey boat but this soon vanished from view before everyone could get onto it.

A bird that we all managed to see was a juvenile GANNET that powered southward through the ever-increasing waves. With some time spare we opted to visit the Broads area and Ludham was our first port of call, where a good mixed flock of BEWICK'S and WHOOPER SWANS fed in a winter wheat field.

The remainder of the day was spent exploring the coastal roads, noting COMMON BUZZARD and a large flock of PINK-FOOTED GEESE feeding close to the road. Unfortunately rain arrived and curtailed the rest of the day, so as the light went we headed home after a good trip and a good start to the year!