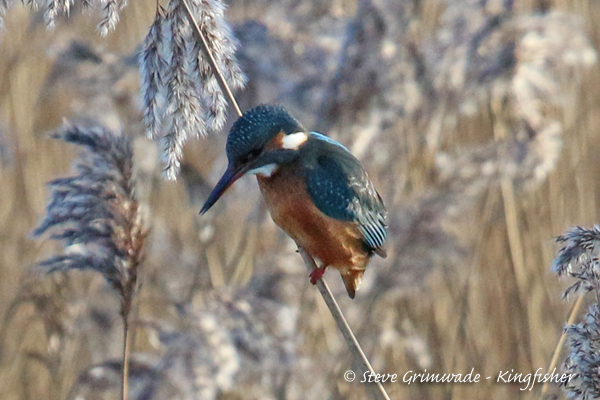 It was very cold and frosty as we made our way northwards to Norfolk and in some areas there was a covering of snow. After a stop for bacon rolls and coffee we continued onwards and with little traffic on the roads we made good time.

Driving on the back roads up towards Titchwell, we stumbled across a cracking male HEN HARRIER that was hunting over fields disturbing the roosting LAPWINGS.

We got to Titchwell on time and met up with two couples who were joining us for the day. We then went straight round to the feeders and saw a fine LESSER REDPOLL which quickly disappeared! Apart from the common species we had good views of a female BRAMBLING perched above the feeders.

Making our way along the footpath gave us the chance to watch a WATER RAIL feeding quietly in the stream unaware of its audience on the footpath above. A small number of SISKIN fed in the Alders and a young male BRAMBLING was seen too.

On the drained pool to the west of the footpath were a LAPWING, REDSHANK and two COMMON SNIPE, although on closer inspection we managed to find ROCK, MEADOW and a single WATER PIPIT, but the latter was quite flighty and didn't settle for long.

We also had views of up to four KINGFISHERS flying around, including one that perched up and gave excellent scope views for us all. PINK-FOOTED GEESE could be heard and we managed to find some in the grazing fields nearby.

With such cold temperatures, most of the open water was frozen and birds were scarce apart from a couple of AVOCET and the usual ducks. MARSH HARRIERS were seen quartering the marsh, much to the disdain of the wintering DARK-BELLIED BRENT GEESE who kept getting disturbed from feeding.

On the brackish marsh we had excellent views of KNOT, DUNLIN, RINGED & GREY PLOVER, REDSHANK, BLACK-TAILED GODWIT and CURLEW as they fed voraciously on the mud. Out on the saltmarsh we watched a CHINESE WATER DEER feeding but most of the time we could only see the rear of this animal!

The coastal lagoon was full of birds which gave an opportunity to compare BLACK and BAR-TAILED GODWITS as they fed close to each other. A GREENSHANK was a surprise find at this time of year as it fed on a distant pool, but the SPOTTED REDSHANK that dropped in was a bird we expect to see at Titchwell during the winter.

PINTAIL, WIGEON, SHOVELER, TEAL, MALLARD and a single female GOLDENEYE fed on the open water along with a few LITTLE GREBES, before we made our way out to the beach just after high tide.

A few SANDERLING scuttled around with some TURNSTONES for company, whilst a small group of GREY PLOVER and OYSTERCATCHERS fed on the many razor shells that had been washed up after recent northerly storms.

A look out to sea produced a pair of RED-BREASTED MERGANSERS plus a small party of COMMON SCOTER but otherwise it was rather quiet. A lovely GUILLEMOT flew past us at close range before dropping onto the sea towards Brancaster.

With time getting on we headed back to the centre for a hot drink and lunch, which was very welcome indeed. Afterwards we headed eastwards for an afternoon at Burnham Overy.

The walk out along the sea wall provided us with lots of feeding PINK-FOOTED GEESE and WIGEON and it wasn't long before our first BARN OWL put in a show, feeding over the fields where it gave superb views. Slightly unexpected was a young SPOONBILL that flew over the creek, before dropping down out of sight in one of the many channels.

A pair of RED-BREASTED MERGANSERS fed in the channel but eventually flew away to an area of deeper water. Eventually we reached a viewing area and a scan of the marshes provided us with up to six MARSH HARRIERS, another BARN OWL, WHITE-FRONTED GEESE, GOLDEN PLOVERS and lots of duck feeding on the wet meadows.

As we retraced our steps back to the car park, a juvenile female PEREGRINE came flying over disturbing everything and at one point she was hunting the BRENT GEESE!

After cake back at the van we headed back to Titchwell, where we dropped some of the group off before heading home after what had been a good day's birding.