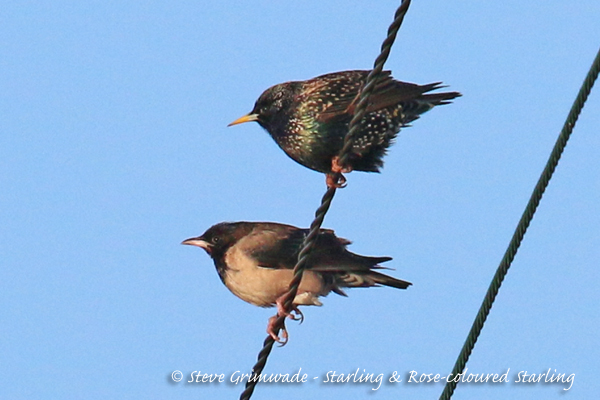 Saturday 23rd January 2016
We left Essex bright and early for our journey down to the southwest and as we headed along the M4, the first of several RED KITES was seen perched close to the road. COMMON BUZZARDS and KESTRELS were also seen before we arrived in Collumpton for a final pickup.

After a brief stop at Exeter, we headed down to Broadsands to find it very busy with people enjoying a bright Saturday afternoon. After lunch we wandered down to the carpark where it didn't take long before a superb FIRECREST was flitting around in front of us.

We enjoyed this brightly coloured bird in the sunshine before making our way to the second carpark, but despite a very good search we failed to locate any Cirl Buntings. This was probably down to human disturbance, although we did see a male SPARROWHAWK perched up not far from the feeding place.

A male STONECHAT sat up for us and a couple of CHIFFCHAFF fed along the hedge line. A scan of the bay produced a small number of FULMAR including some already at nesting sites on the cliff! On the water we found RED-THROATED DIVER, GREAT NORTHERN DIVER, SHAG, CORMORANT and some distant GANNETS passing by.

As some of the birds were quite distant we walked over to Eldberry Cove for a closer look and from here we added SLAVONIAN GREBE that was close inshore. At least 6 GREAT NORTHERN DIVERS were seen before drizzle and light rain sent us back to the carpark area.

On our way down we watched a male and female GREY SEAL frolicking in the shallow water close to the shore, but another look in the carpark failed to produce any buntings so we headed off westwards towards Cornwall.

The weather conditions were quite atrocious for our drive as it was great to finally arrive at our hotel and get unpacked before meeting for dinner which went down very well indeed!


Sunday 24th January 2016
We met for an early breakfast and to take advantage of daylight and birding time. As the morning got lighter we could see that it had turned misty and murky. Heading for Perranuthnoe on the south coast, we parked up and walked down to the beach but apart from a few OYSTERCATCHERS it was rather quiet.

Taking the coastal footpath westwards we watched a EURASIAN WHIMBREL fly west and both SPARROWHAWK and KESTRELS hunted overhead. Reaching our chosen point we began scanning the rocks to found a small flock of CURLEW and Steve noted a very well-marked Whimbrel roosting on the rocks. Eventually it went off to feed where we watched with great detail to see if it had a brown rump and tail. After what seemed an eternity it flapped and showed brown which made it a HUDSONIAN WHIMBREL, a very rare visitor from North America!

After a while it flew eastwards in company of the EURASIAN WHIMBREL which gave excellent plumage comparisons in flight. Our time was then spent scanning the bay for wintering divers and we managed to locate up to 6 BLACK-THROATED, 6 RED-THROATED and around 10 GREAT NORTHERN DIVERS but there was no sign of the wintering Pacific Diver, although a distant bird close to St. Michaels Mount did look a little promising.

A juvenile PEREGRINE flew east and out in the bay Andrew did well to find a juvenile GLAUCOUS GULL that was seen bobbing around on the water. With the distant diver niggling on our minds we drove round to Marazion and walked out along the St. Michael's Mount causeway. A dead RAZORBILL was found on the slipway and plenty of ROCK PIPITS and PIED WAGTAILS fed on the tideline.

Despite a good scan, we could only find a single GREAT NORTHERN DIVER feeding in the area that we’d been looking at previously. We then went to pick up lunch before driving round to Mousehole.

Scanning St. Clement's Isle from the footpath produced a different GLAUCOUS GULL and a small number of GANNETS moving west. At nearby Newlyn we saw several more GREAT NORTHERN DIVERS offshore but apart from that it was pretty quiet so we moved the short distance back to Penzance.

The sunny weather had brought out many people to the seafront and we got several strange looks as we watched a mixed flock of around 30 SANDERLING, 2 DUNLIN and around 40 PURPLE SANDPIPERS! A stunning GREAT NORTHERN DIVER fished closely, affording excellent views with a few SHAGS and CORMORANTS roosting on offshore rocks.

During the last week a first-winter Ring-billed Gull had been reported from the nearby village of Sancreed, but despite a search of the lanes we couldn't find any gulls so we popped into Drift Reservoir. Here, a search of roosting gulls produced a fine adult MEDITERRANEAN GULL that flew off westwards. Several COMMON BUZZARDS were also seen plus a small party of LINNETS.

With the afternoon getting on we visited Marazion Marsh RSPB reserve in the hope of catching up with a wintering Bittern, but the wind was just too strong for us to keep our optics still! A couple of STONECHATS, SNIPE and small party of TEAL were the highlights before we admitted defeat and spent the remainder of the day at Helston boating lake.

There was no sign of the usual Whooper Swan but a couple of GREY WAGTAILS kept us entertained as they fed around the choppy lake.

We headed back to the accommodation for a wash and brush up before meeting for our evening meal.


Monday 25th January 2016
The days forecast was not the best as we met for breakfast, so afterwards we stopped off at Helston Sewage Works where it was challenging to find some shelter from the strong southwesterly winds.

Eventually we found a sheltered spot that held up to 15 COMMON CHIFFCHAFFS catching insects in a large bramble clump. A pale grey CHIFFCHAFF was seen very briefly but promptly disappeared from view which was frustrating!

A male BULLFINCH perched up briefly in the hedge and along the track we watched GOLDCREST, LONG-TAILED TITS, CHIFFCHAFF and lots of BLUE TITS feeding. A pair of RAVENS flew over us and towards the town before we headed off to the Hayle Estuary.

Our first port of call was Ryan's Field where a large flock of LAPWINGS roosted and careful scanning of the weedy edges firstly yielded a few ROCK PIPITS, although on closer inspection we found a winter-plumaged WATER PIPIT grovelling around at the back of the scrape. A KINGFISHER zipped past calling and a GREY WAGTAIL fed close to the hide.

We wandered over to the estuary but the wind once again made viewing difficult and apart from large numbers of roosting gulls and both TEAL and WIGEON it was rather quiet. At nearby Carnsew Pool, our luck changed when we had good scope views of a GREAT NORTHERN DIVER plus a winter-plumaged RED-NECKED GREBE that spent more time under the water than on top of it!

As the weather forecast due to change significantly the next day we made the decision to bring forward some birding and headed off west to Bodmin Moor, where we soon located the regular wintering male LESSER SCAUP on Dozmary Pool. This scarce duck from North America returns to the lake every winter and although it wasn't close, we had good scope views.

After several squally showers had moved quickly through we finished our day on the Lizard. After parking up we took a stroll around the village and were lucky to find another birder who pulled up alongside us and told us that our target was back along the road.

With a spring in our step it took us a few minutes to track down a superb adult ROSE-COLOURED STARLING as it perched on overhead wires close by. It flew off several times but it did return and we managed to get in the scopes!

By now the weather had improved significantly so we popped into Kynance Cove to look for Chough. There was no sign of any although the view more than made up for it, as massive waves crashed in creating some magnificent scenes.

A short while later we arrived back at the hotel where we had some time to relax before our evening meal which went down very well indeed.

Tuesday 27th January 2016
We awoke to gale force winds and early rain which made loading up the van something of a challenge! With some time to spare we revisited the Sancreed area where the first-winter Ring-billed Gull continued to be reported.

On arrival we couldn't even find a gull and despite a good search we just managed to find lots of HERRING GULLS.

With time against us we started the long journey home, in atrocious weather conditions there were very few birds were noted except for a few RED KITES and a flock of COMMON GULLS close to Heathrow Airport.

It had been an enjoyable weekend with some good birding and good company, despite poor weather at times!