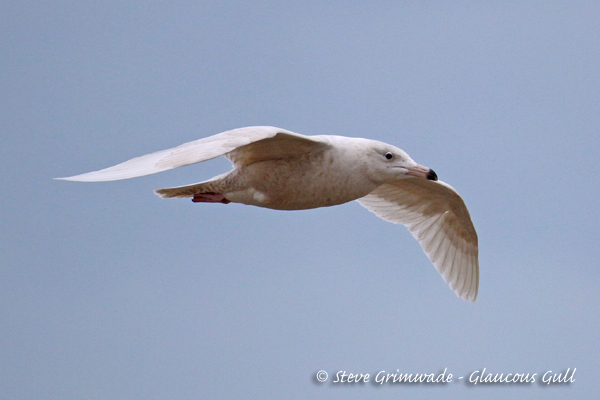 The first bird we saw was a RING-NECKED PARAKEET close to the M20/M25 junction before we stopped at Maidstone Services. We started the day at Pett Levels, East Sussex where the long-staying Glossy Ibis gave us the slip although we did find roosting DUNLIN, GREY PLOVER, BLACK-TAILED GODWIT, CURLEW and REDSHANKS plus lots of feeding WIGEON.

Moving eastwards we drove slowly past Scotney Pits but the strong winds made the whole area look like the sea with huge waves crashing into the eastern shore!

Heading straight to the fishing boats at Dungeness proved the right choice with us soon locating a 1st winter CASPIAN GULL plus the 1st winter GLAUCOUS GULL roosting on the beach. Unfortunately, a couple of members of the public flushed the Caspian Gull three times by walking straight through the flock, despite us all standing there watching them!

We walked to the fishing boats where we managed to get some shelter and had excellent views of lots of KITTIWAKES showing down to around 6 feet. Other goodies included RED-THROATED DIVER, GUILLEMOT, RAZORBILL, GANNET, FULMAR and MEDITERRANEAN GULL.

With lunch approaching we headed round to the RSPB reserve and went straight to the Dipping Pond where we re-found a roosting LONG-EARED OWL in the dense scrub. We had really good scope views of this now scarce winter visitor.

We went back for lunch in the warm visitor centre and from the windows we watched lots of GOLDENEYE diving at the back of the lake.

Afterwards we checked out the feeders by the toilet block and found at least four TREE SPARROWS feeding amongst the many common birds. Next stop was the ARC pit and whilst walking to the hide we heard a KINGFISHER but it remained hidden. It was good to get some shelter from the gale-force winds and here we found several MARSH HARRIERS, 2 red-head SMEW which had dropped in, GOLDCREST, LONG-TAILED TITS and two CHIFFCHAFFS flitted close to the hide.

With the wind still strong we drove down to Springfield Bridge where a BITTERN was seen in flight over Denge Marsh and we could just about pick out a roosting GREAT WHITE EGRET hiding behind a clump of reeds.

The day concluded back at Pett Levels, where this time we had excellent views of a GLOSSY IBIS feeding close to the road with WIGEON, TEAL and COOTS. After some delicious cake we headed for home after what had been a cracking day!