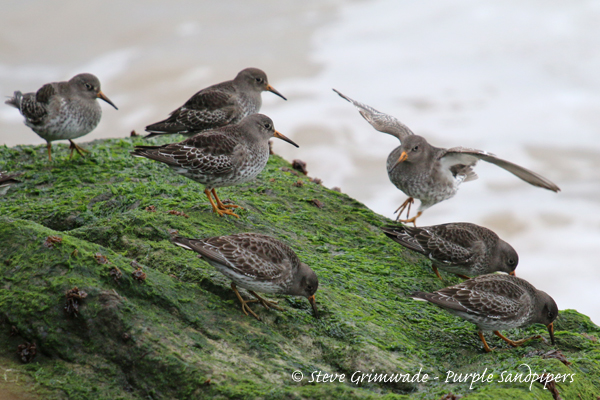 We kicked off the day at Blythburgh to look for the Portuguese-ringed Green-winged Teal that we had seen the previous week but the tide was high and many of the TEAL were hidden from view. We did see plenty of roosting waders including GREY PLOVER, KNOT, REDSHANK, CURLEW, OYSTERCATCHERS and BLACK-TAILED GODWITS.

Our next port of call was Ness Point, Lowestoft where after a short walk we located a single PURPLE SANDPIPER on the rocks and a little further on we found at least 15 more of which we had stunning views as they fed right below us with a number of TURNSTONE.

Up to three ROCK PIPITS were on the seawall whilst offshore we noted a steady passage of GANNETS heading north, plus a second winter MEDITERRANEAN GULL and the occasional RED-THROATED DIVER. We had good scope views of a winter-plumaged KITTIWAKE on an offshore groyne before we made our way back to the carpark.

By now a few spots of rain had started to fall which was much earlier than was forecast! We quickly adapted our plans and headed straight up to the Hickling area where a slow drive along the roads revealed a flock of PINK-FOOTED GEESE plus around 17 EGYPTIAN GEESE but the highlight here was the juvenile female HEN HARRIER that cruised along a ditch giving superb views!

We stopped off for lunch and then headed round to the raptor watch-point at Stubb Mill. With rain falling steadily we wandered along the lane and on reaching the unsurprisingly empty viewpoint we immediately located a pair COMMON CRANES feeding right in front of us!

Three more COMMON CRANES were noted flying over the trees but soon dropped down and with little else flying due to the poor weather we moved off south and made a unplanned stop at Minsmere, where we spent the remainder of the day in the Island Mere hide.

Up to seven MARSH HARRIERS flew around and offered some good views in the falling light plus CETTI’S WARBLERS and WATER RAILS were heard. One of the group managed brief views of a FIRECREST in the Rhododendron tunnel.
With the hide all to ourselves, we tucked into cake before making the journey back after what had been a great day despite the weather!