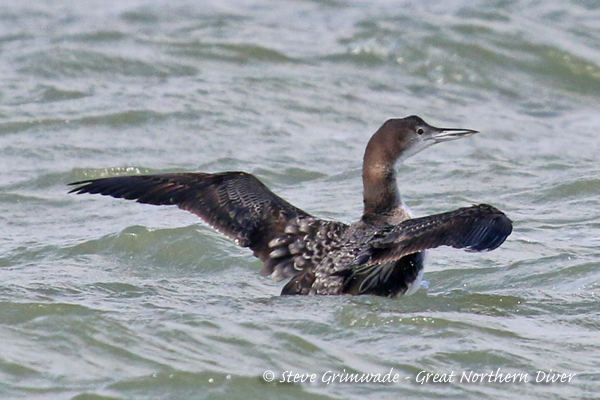 With perfect weather we set off from West Mersea on time and noted large numbers of BRENT GEESE along the channels. The first of many RED-BREASTED MERGANSERS showed well on the edge of Salcott Channel. BLACK-TAILED and BAR-TAILED GODWITS, REDSHANKS, CURLEW, LAPWING, GREY PLOVER, KNOT and DUNLIN fed voraciously on the water’s edge. Up to 8 MARSH HARRIERS were noted including several displaying birds taking advantage of the sunshine.

Heading out into deeper water, we soon found a party of 3 GREAT NORTHERN DIVERS feeding together and then a couple of RED-THROATED DIVERS flew out of the river.

Lots of GREAT CRESTED GREBES and RED-BREASTED MERGANSERS were seen as were several large flocks of BRENT GEESE. A small number of AVOCETS were spotted close to Tollesbury on the rising tide. As we neared Osea Island we found a winter plumaged GUILLEMOT that turned out to be of the Bridled form and a real surprise.

By now the wind had increased slightly making it a little choppy and on our return journey we found no less than 6 GREAT NORTHERN DIVERS, our highest ever count!

We headed back to the shelter of West Mersea after what had been a superb boat trip with decent weather for a change.