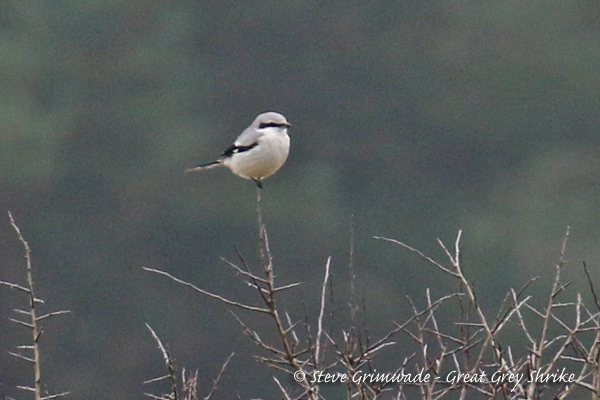 We started the day at Santon Downham where a couple of enjoyable hours were spent along the river. Several GREY WAGTAILS were seen and a KINGFISHER zipped past. Small parties of SISKINS sang from the riverside trees but were sometimes drowned out by the roar of F-15's from nearby Lakenheath.

GREAT SPOTTED WOODPECKERS drummed and quite a few REDWING fed in the pastures bordering the river. Despite a good search, we couldn't find any Lesser Spotted Woodpeckers which had been seen occasionally during the previous week.

A walk into the nearby churchyard provided us with a singing male FIRECREST along with several GOLDCREST plus NUTHATCH, LONG-TAILED TITS and SISKINS.

From here we drove round to Grimes Graves where after a brief walk we had excellent views of a wintering GREAT GREY SHRIKE in the open clearings. With lunchtime approaching we headed deep into the forest where after a short while we had good scope views of a displaying male GOSHAWK. A RED KITE was seen soaring over some distant woodland along with several COMMON BUZZARDS.

The remainder of the afternoon was spent in the local area exploring new sites which yielded quite a few BRAMBLINGS, YELLOWHAMMERS, GREY PARTRIDGE and REED BUNTINGS plus a staggering 18 RED KITES and 27 COMMON BUZZARDS!