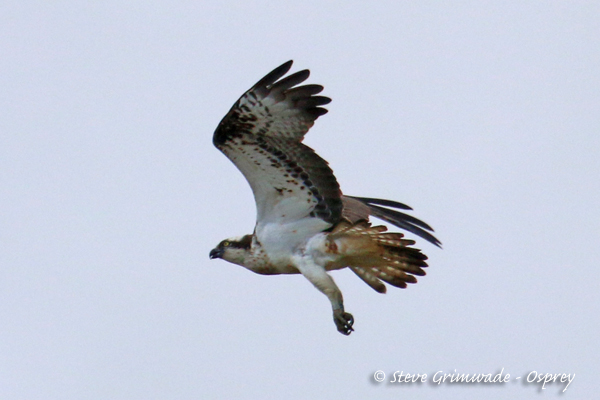 The early morning rain soon passed as we drove northwards through Cambridgeshire noting our first COMMON BUZZARDS. After a stop along the way for refreshments we arrived at the Egleton Nature Reserve where we met up with Iain, Dianne and Andy who had travelled down from the north to meet us.

A scan from the Anglian Water Birdwatching Centre produced lots of SAND MARTINS frequenting an artificial Sand Martin bank. We went for a walk along the trails and came across a lovely WILLOW WARBLER that sang above us. Other goodies along the track included BULLFINCH, SONG THRUSH, CHIFFCHAFF and a singing male SEDGE WARBLER.

The first hide produced many common wildfowl and we then moved on to the next hide overlooking the main part of the reservoir. A scan here revealed a distant moulting adult GREAT NORTHERN DIVER although the light wasn't brilliant.

The last hide before lunch gave us superb views of an OSPREY perched and in flight, plus the surprise find of a superb male GARGANEY that fed constantly on the open water. OYSTERCATCHERS, LAPWING, REDSHANK and RINGED PLOVERS were seen plus lots of EGYPTIAN GEESE.

It was back to the centre for lunch which was very enjoyable and afterwards we made the drive round to the Lyndon Nature Reserve on the south side of the reservoir.

The feeders next to the centre produced a pair of YELLOWHAMMERS which looked delightful in the sunlight, plus TREE SPARROWS, CHAFFINCHES, REED BUNTINGS, GOLDFINCHES and GREENFINCHES.

Our first port of call on leaving the centre was to the hide overlooking Manton Bay, where a female OSPREY was seen on the nest and a few minutes previously, we had seen the male flying eastwards over the water.

We enjoyed some time in the hide noting a few RED KITES plus a male and female SCAUP. The male OSPREY eventually came back with a fish which he proceeded to eat on a nearby post before swapping over incubating duties with the female. SAND MARTINS and SWALLOWS hawked low over the water and a SEDGE WARBLER sang from the scrub.

Stopping off in another couple of hides we had flyby views of two KINGFISHERS plus we relocated the moulting GREAT NORTHERN DIVER and found another winter plumaged bird much closer.

It was then back to the centre for a welcome drink where we spent some time watching the feeders before heading home. The journey back produced up to five RED KITES plus COMMON BUZZARDS and a SPARROWHAWK.

We got back after a superb day with excellent weather throughout plus good birds and a great bunch of customers!