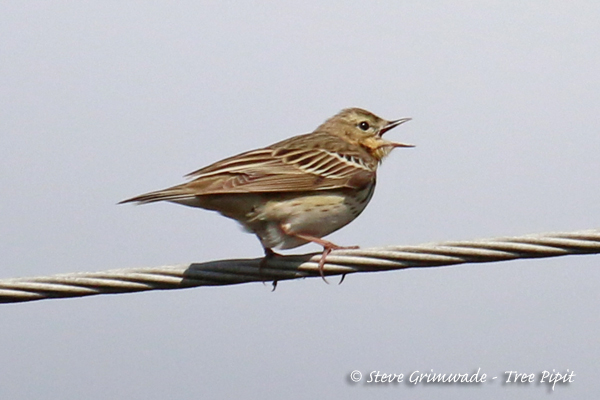 Spring certainly wasn't in the air today with a bitterly cold northerly wind blowing across the hills at Ashdown Forest. Nevertheless the sun shone and the first bird of our walk was a lovely male COMMON REDSTART that perched on a fence briefly before flying off over a ridge. A little further on, we enjoyed stunning views of a TREE PIPIT singing and performing a fantastic display flight. Whilst watching the pipit, we noted a pair of STONECHATS flitting around and even better were three WOODLARKS that spent some time running around feeding in the short grass.

Several SISKINS and a LESSER REDPOLL flew over before we found more COMMON REDSTARTS singing in the woodlands. Further along we watched a pair of COMMON REDSTARTS looking for a nest site whilst a TREE PIPIT sang from the top of a Pine Tree.

A few WILLOW WARBLERS were seen and a singing male COMMON WHITETHROAT. We heard CUCKOO and NUTHATCH but these remained hidden.

We eventually made it back to the van where we had lunch as an unannounced hail shower came through the area!

Afterwards we moved the short distance to Weir Wood Reservoir where we enjoyed superb views of a female GREY WAGTAIL and over the water, good numbers of SAND and HOUSE MARTINS plus SWALLOWS hawked insects. We took a footpath along the edge of the reservoir and found some good plants including a pristine EARLY PURPLE ORCHID plus YELLOW ARCHANGEL, EARLY DOG VIOLET, LADY’S SMOCK and BLUEBELLS in great profusion.

At a suitable viewpoint we scanned the water which was rather quiet due to disturbance from boats but the bushes and scrub produced BULLFINCH, LESSER WHITETHROAT, TREECREEPER, CHIFFCHAFF and WILLOW WARBLER plus our first LARGE RED DAMSELFLY of the year.

We wandered back to the vehicle and drove over to Bough Beech Reservoir where after a refreshment stop that produced MARSH TIT, SEDGE WARBLER and GREAT SPOTTED WOODPECKER we moved onto the causeway.

Many COMMON TERNS were seen and careful scrutiny produced a cracking summer plumaged BLACK TERN and some ARCTIC TERNS. Other goodies included four MANDARIN DUCKS that flew over plus REED WARBLER, SHOVELER, COMMON BUZZARD and a mixed flock of hirundines which rounded off a super day!