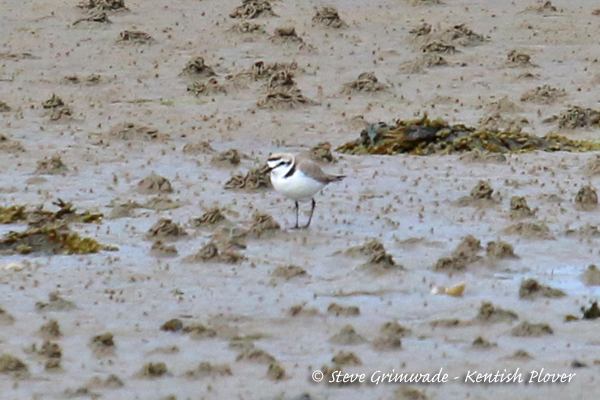 Saturday 30th April 2016
We left Essex bright and early and made good time as we headed southwest until we reached Bournemouth and the traffic ground to a halt. Eventually we were on the move again and we were soon arriving at Portland Bill.

Heading to the cliffs, we soon noted plenty of GUILLEMOTS and RAZORBILLS making flights out to feed and some were seen on the cliffs. A couple of FULMAR came into view plus CORMORANT and SHAG which gave nice flyby views.

The rocky areas held quite a few WHEATEAR plus ROCK PIPITS and whilst looking out to see we had good views of a couple of WHIMBREL that flew onto the rocks.

The sea was rather quiet as a northwesterly wind was blowing and it just produced a single GANNET.

We enjoyed lunch in the warm sunshine and whilst tucking in, we found a female COMMON REDSTART in the nearby compound. Good scope views were had as it fed on insects in the sheltered areas until it was disturbed by a security guard.

A RAVEN flew past accompanied by a CARRION CROW where good size comparison could be made before we wandered over towards the Portland Bird Observatory. A check of the obs quarry produced another female COMMON REDSTART plus several WHITETHROAT and
CHIFFCHAFF.

SKYLARKS and LINNETS sang from around us as we entered the observatory compound. A quick check of ‘what’s about’ proved that there were good numbers of common migrants being seen so we headed up towards the top fields.

One of the adjacent fields held really good numbers of WHEATEAR and with a bit of searching, we managed to locate our first WHINCHAT although the light wasn’t great for viewing.

Carrying on up the track, several COMMON WHITETHROAT were seen plus lots of LINNETS with SWALLOWS with the occasional HOUSE MARTIN passing through northwards.

News then came through of a Bee-eater at nearby Southwell so we carried on in that general direction until we heard that it had just flown over the observatory and out to sea – how frustrating!

We turned round and retraced our steps and had much better views of two male WHINCHATS and more WHEATEARS. Our walk took us back down to the coast and we stopped off at the café for a welcome cuppa and an ice cream for some.

Whilst sitting outside, a single SANDWICH TERN flew west and an adult GANNET moved eastwards offshore.

We began to head back to the mainland but with some time to spare, stopped off at Ferrybridge on our way past and this proved successful with around 50 DUNLIN, 30 RINGED PLOVER and singles of OYSTERCATCHER, WHIMBREL and SANDERLING on the mudflats.

A scan of the surrounding area produced another 12 WHEATEARS and the bushes in the carpark held a couple of WILLOW WARBLERS that were feeding on the sheltered side.

We then headed to our accommodation where check in was fairly speedy and we had some time before we met to complete the bird list over a drink before our evening meal.


Sunday 1st May 2016
Most of the group met at 7.00am for a walk to nearby Lodmoor RSPB Reserve which was beautiful in the early morning sunshine. The shallow pools held a few DUNLIN and a single COMMON SANDPIPER whilst LITTLE EGRETS, GREY HERON, TEAL, SHOVELER, POCHARD, TUFTED DUCKS and SHELDUCKS all frequented the many islands.

The main interest was in the bushes with lots of singing warblers including WHITETHROAT, CHIFFCHAFF, SEDGE and REED WARBLERS but the real stars of the show were several pairs of CETTI’S WARBLERS, two of which gave amazing views as they chased each other round and round, almost hitting us as they were so busy with their courtship!

At the north end of the reserve we spotted a flock of COMMON SWIFTS whilst overhead flew four WHIMBREL and a few COMMON TERNS.

Our walk took us back along Weymouth seafront where the very calm conditions allowed us to locate a GREAT NORTHERN DIVER out in the bay along with more COMMON TERNS and a GREAT CRESTED GREBE.

It was then back for a hearty breakfast which went down very well indeed. Afterwards we were loading up the minibus when news came through on Twitter of a Kentish Plover at nearby Ferrybridge.

We headed there straight away to find it had flown off towards the shingle about 20 minutes previously, so we spent some time scanning the mud and found some summer plumage TURNSTONE plus three WHIMBREL, two SANDERLING, the usual RINGED PLOVERS and DUNLIN. Some of the RINGED PLOVERS appeared to be of the larger race tundrae.

Up to seven LITTLE TERNS put on a show for us as well as at least six SANDWICH TERNS and out on a sandbar we had distant views of two BAR-TAILED GODWITS.

Eventually, one of the other birders located the Kentish Plover and after a bit of a panic to get on it we all enjoyed lovely views of this stunning male KENTISH PLOVER as it fed mostly on its own along the shoreline!

With some time still available on our parking ticket, we wandered along the pavement where we had stunning views of this scarce visitor to the UK.

Delighted by this we headed up onto Portland and stopped off to pick up lunch before heading back down to Portland Bill.

A brief seawatch produced several KITTIWAKES plus plenty of RAZORBILLS, GUILLEMOTS and a couple of GANNETS, but the stars were 2 ARCTIC SKUAS that came through reasonably close, one pale phase and one dark phase.

We once again visited the obs quarry but the whole area was much quieter than the previous day although we did see a couple of RAVENS plus a few WHEATEARS were dotted around and a few SWALLOWS moved through northwards. We popped into the bird observatory and found that they too were finding it rather quiet so we enjoyed lunch sitting on the obs patio in the sunshine!

On our return to the vehicle we stopped off at the obs quarry again, where a LITTLE OWL had been found roosting on the cliffs and we enjoyed brilliant views!

We then decided to move up to the north end of the island and stopped off to photograph the view over Chesil Beach before taking a walk around the common. It was so quiet with only a single WHEATEAR, ROBIN and a pair of GREAT TITS the only birds around so we moved on to Weymouth and visited Radipole Lake RSPB Reserve.

We enjoyed a hot drink in the centre before taking a slow stroll up to North Hide. CETTI’S and REED WARBLERS sang but remained very elusive due to the drop in temperature and the increasing wind.

Reaching north hide, there were large numbers of hirundines feeding over the open water which included SAND and HOUSE MARTINS, SWALLOWS and SWIFTS. A male REED BUNTING was seen perched on a fence and we had excellent sightings of a beautiful male MARSH HARRIER as he quartered the reeds in front of us.

The route back was also quite productive with us locating the long-staying HOODED MERGANSER that turned up at Radipole in 2008, after allegedly being found exhausted in a storm drain.

Further along the pathway we found a couple of COMMON SANDPIPERS on rocky islands, plus a skulking warbler that was presumably a REED WARBLER. We arrived back at the centre and then headed back to base after what had been a superb day.


Monday 2nd May 2016
We missed out on a pre-breakfast walk due to the fact that rain was forecast later in the day and we wanted to get some birding in beforehand! As usual, breakfast was delicious and very filling and we managed to get away slightly earlier than planned.

A short while later we arrived at Arne RSPB Reserve on the edge of Poole Harbour and although the weather was overcast and breezy, temperatures had risen and it was quite mild.

Starting in the carpark, we noted lots of SISKINS flying around calling plus NUTHATCH, GREAT SPOTTED & GREEN WOODPECKERS and COAL TITS amongst the usual woodland species. A small herd of SIKA DEER frequented the overflow carpark plus a SONG THRUSH fed on a nearby lawn.

During the next hour or so we made a circular walk of Combe Heath where we found STONECHAT, MEADOW PIPITS, more SISKINS, COMMON BUZZARD and we had a fleeting glimpse of a DARTFORD WARBLER.

From the hide overlooking Middlebere Lake we found a good flock of around 100 DUNLIN plus CURLEW, WHIMBREL, SHELDUCK and a few BLACK-TAILED GODWITS. The return leg of the journey gave us distant views of a PEREGRINE that zoomed off eastwards towards Poole Harbour. The sheltered woods provided home to a few singing GOLDCRESTS whilst a WOODLARK sang from the area to the north but couldn't be relocated.

After a brief pit stop back at the carpark we took a walk around the rest of the reserve where the windy conditions made viewing slightly challenging. A scan from Shipstal Point produced nine SANDWICH TERNS, REDSHANK, TURNSTONE, CURLEW, WHIMBREL and two GREY PLOVER, one of which was in pristine summer plumage.

Amongst the BLACK-HEADED GULL colony we found a pair of stunning MEDITERRANEAN GULLS in summer plumage and we could hear a PEACOCK calling from one of the nearby islands.

With time getting on, we strolled back through the woodland noting more SIKA DEER including a fantastic white individual.

We reached the visitor centre and partook in a spot of lunch in the excellent café and shop before beginning our journey back east.

The rain eventually caught up with us and it was pretty dreary at times but this was brightened by a close RED KITE on the A303 and a RING-NECKED PARAKEET that flew slowly over the M25.

We arrived back in Essex to find torrential rain and we realised how lucky we had been with the birds and weather during our fantastic weekend in Dorset. Huge thanks to the clients who had joined us and made it even more special!