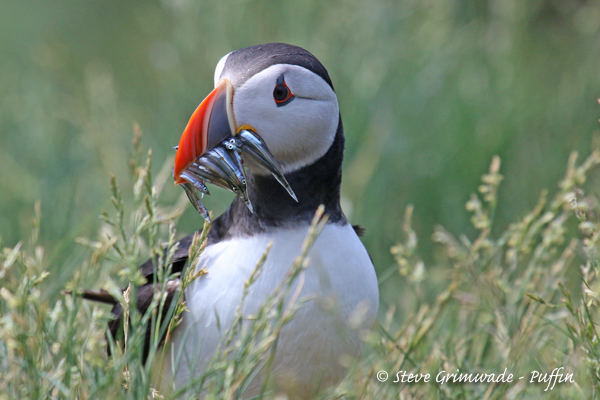 Friday 24th June 2016
Our tour started with several pickups in Essex and Hertfordshire which soon saw us on our way north. Good numbers of COMMON BUZZARD were noted and the first of around eight RED KITES drifted over Peterborough Services.

After a coffee and breakfast stop, we motored onwards and made a stop at the RSPB reserve at Fairburn Ings. On the feeders adjacent to the visitor centre were lots of TREE SPARROWS including quite a few juveniles that had been colour-ringed. A pair of BULLFINCH gave brilliant views as they fed on the ground below the feeders.

We took a walk around the nature trail noting many RUBY-TAILED WASPS whilst COMMON WHITETHROAT and BLACKCAPS sang and COMMON SWIFTS zoomed overhead. The trail took us up the hill past a good colony of SOUTHERN MARSH and COMMON SPOTTED ORCHIDS and a pit that held a few LAPWING plus REED BUNTING and LITTLE GREBE.

Since our last visit, a new trail had been opened which took us up above the lakes and scrapes. The reed-fringed pools held TUFTED DUCKS, LITTLE & GREAT CRESTED GREBES, SHELDUCK, GADWALL and lots of COOTS.

Eventually we reached several viewpoints and a scan of the scrape below yielded three GREEN SANDPIPERS, LITTLE RINGED PLOVER and a COMMON TEAL.

Further on we checked out the next lake and found a roosting SPOONBILL in amongst CORMORANTS and LITTLE EGRETS. It was then time to head back to the visitor centre where we had lunch accompanied by TREE SPARROWS and BULLFINCHES once again.

It was then time to head onwards which went well until we reached Newcastle when we met the rush hour traffic. We were eventually through the worst of it but further on, we slowed down as the road was closed due to an accident, so we headed off across country arriving in Seahouses slightly later than planned.

After checking in, we met for our evening meal which was very welcome and much needed after a long day.


Saturday 25th June 2016
We met for breakfast at 8.00am and then picked up lunch before heading down to the quay to join our boat for our all day visit to the famous Farne Islands.

The weather was absolutely perfect for the day with sunshine, light winds and a calm sea. Heading out on time, we noted our first GANNETS making feeding forays from their breeding colony on Bass Rock in the Firth of Forth, plus small numbers of COMMON EIDER bobbing around the harbour mouth.

The boatman took us to view some of the islands where we had exceptional views of the ATLANTIC GREY SEAL colony as well as CORMORANTS, SHAGS and a good selection of the larger gulls.

At 10.30am, we landed on Staple Island to the cacophony of sounds of thousands of COMMON GUILLEMOTS, RAZORBILLS and PUFFINS all at close range and the couple of hours we spent on the island gave us the chance to enjoy these fantastic birds at close range.

Other species seen here included ROCK PIPIT, FULMAR, KITTIWAKE and SHAGS all with young of varying degrees of size varying from just hatched right through to almost fully grown young.

Time went quite quickly and we then caught the boat to Inner Farne for the remainder of the afternoon. On arrival we were treated to a fantastic sight, but were attacked by the many affronted ARCTIC TERNS which mostly had young chicks although some were still incubating.

Lunch was now our main priority and we headed up to the picnic tables to enjoy lunch in the sunshine whilst PUFFINS, ARCTIC, SANDWICH and COMMON TERNS flew past. We took a slow circular walk around the island and once again had close views of SHAGS, RAZORBILLS and KITTIWAKES whilst terns flew by giving us a good chance to look at their ID features.

Plenty of photographs were taken, some of terns standing on our heads and our two and half hours soon disappeared, so we slowly wandered down towards the jetty for our return to Seahouses. Then we spotted a fine adult ROSEATE TERN roosting with the ARCTIC TERNS, but after around five minutes it flew off although luckily came back on the other side of the jetty.

Then all the terns flew off and the ROSEATE TERN went high to be joined by another individual but the pair unfortunately flew off to the south.

It was then time to head back to the mainland and we arrived back at a reasonable time which gave us the opportunity to have an earlier than usual dinner.

Our evening meal went down well and everyone had a good colour from the 'sea air'!


Sunday 26th June 2016
The day dawned bright and sunny as we enjoyed breakfast whilst overlooking the harbour. After sorting out lunches we headed off, stopping at Monk's Pool where a few SHELDUCK, TUFTED DUCKS and TEAL were amongst the MUTE SWANS and COOTS.

We arrived in the beautiful Harthope Valley close to the market town of Wooler. After parking we walked westwards noting many flyover LESSER REDPOLLS and SISKINS. We enjoyed good views of several SPOTTED FLYCATCHERS as they hawked insects from fence posts and bushes along the valley.

Arriving at the valley end, the river held a family party of GREY WAGTAILS plus a lovely DIPPER sat motionless on a rock for around 15 minutes before feeding in the shallows. A pair of TREE PIPITS foraged under the trees and gave good views before disappearing.

On the return leg of our walk we scanned the hillsides and it wasn't long before we spotted three RED GROUSE on the moors and although distant, we enjoyed reasonable scope views.

Lunch adjacent to the river and in the sunshine was rather hot and very pleasant and then we drove eastwards. We parked up and walked along the tree lined road to find another SPOTTED FLYCATCHER whilst BLACKCAPS sang from the Alder trees.

Reaching the more open hillsides, we checked out bushes and scrub and found a cracking male WHINCHAT which perched up before flying off. We then headed off for a welcome drink which again was wonderful in the sunshine.

It was then time to head to the coast and our rendezvous for an evening boat trip to Coquet Island. Unfortunately by now, the cloud has built up from the west and a few drops of rain started to fall as we birded along the coast.

OYSTERCATCHERS and COMMON EIDER fed along the shoreline and a CURLEW probed for food in a rock pool. The rain fell heavier as we parked up and we felt the trip would be cancelled. A phone call was made to the skipper and he was happy to go ahead so we donned waterproofs and met on the quay.

We headed off at 6.30pm with rain falling steadily but luckily sea conditions were still. As we neared the island lots of PUFFINS were seen and eventually we picked up our first ROSEATE TERN on the beach. With some careful manoeuvring from the skipper, we managed to get close in and get stunning views of up to 10 birds.

FULMAR, COMMON, SANDWICH and ARCTIC TERNS were seen also and as we enjoyed the terns the rain stopped briefly. It was then time to head back and as we neared the harbour we were surprised to find four female GOOSANDER close-by.

It was time to head back to Seahouses where we dumped our gear and headed straight in for dinner which was very welcome after the sea air!


Monday 27th June 2016
The day was bright and sunny although the wind was stronger but thankfully the rain had passed through overnight.

After breakfast we said our goodbyes to Seahouses and began the first part of our journey home. We stopped off at Wansbeck Estuary to look for a Bonaparte's Gull that had recently taken up residence. On arrival, we found a few BLACK-HEADED GULLS plus COMMON TERNS, MUTE SWAN and GREY HERONS feeding on the dropping tide.

Despite a thorough search, we could not find our target, although just as we were about to leave, Steve spotted a gull flying westwards which landed out on the mud. We got it in our scopes and it was the BONAPARTE'S GULL!

We enjoyed good views of this North American visitor and picked out all the relevant ID features before wandering back up to the van.

It was then time to head for home and along the way we saw many COMMON BUZZARDS, KESTRELS and a few RED KITES.

We arrived back mid- evening after what had been a superb tour with great birds, great locations and a lovely bunch of customers!