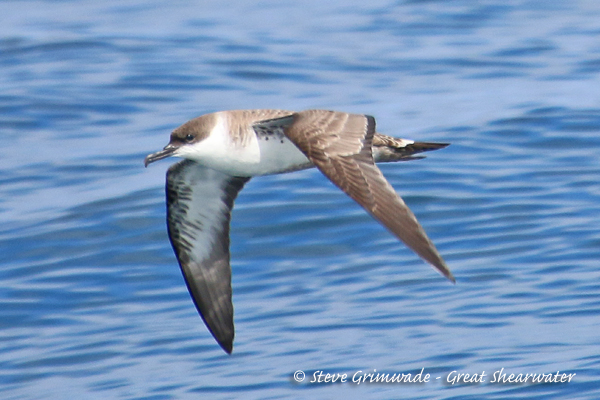 Friday 12th August 2016
We all met on the quay at Penzance for our crossing over to the Isles of Scilly and as we waited, a TURNSTONE fed amongst some discarded rubbish and a family of MUTE SWANS swam past.

Setting sail at 9.15am, we soon moved round the coast towards Mousehole and here we saw our first flocks of MANX SHEARWATERS which totalled around 1000 birds during the crossing. GANNETS and FULMARS were also seen close to the boat as we sailed westwards.

Close to the famous seawatching site of Porthgwarra we located some EUROPEAN STORM PETRELS flitting around close to the waves by the Runnelstone buoy. As we continued several more were seen including a few close birds.

It wasn't just birds though with quite a few COMMON DOLPHINS being seen including some lively individuals leaping out of the water!

As we neared St. Mary's, a few EUROPEAN SHAGS were seen on the rocks and a couple of SANDWICH TERNS accompanied us into the harbour.

We wandered up through town to our accommodation and after a brief time headed off to get lunch in a local pub which was very pleasant indeed in the warm hazy sunshine.

It was then back to the accommodation where our bags had been delivered and after unpacking we took a walk around the nearby Garrison. It was pretty quiet bird-wise as the cloud had cleared to leave a bright sunny day with little cloud and stunning views from the coastal paths.

Butterflies were very much in evidence with SPECKLED WOOD (a subspecies occurs here and no-where else in the world!) plus PAINTED LADIES, COMMON and HOLLY BLUES, MEADOW BROWNS, RED ADMIRALS and SMALL TORTOISHELL amongst others.

Birding highlights were several SANDWICH TERNS plus a couple of male STONECHATS. It was then back to the accommodation to prepare for our evening pelagic.

We met on the quay at 5.00pm and boarded the Sapphire which was run by skipper Joe Pender and seabird guru Bob Flood. Heading out of the harbour, we motored south and just south of the Garrison came across our first OCEAN SUNFISH that gave excellent views close to the boat.

We then headed around five miles south where we started chumming and this encouraged the first FULMARS and EUROPEAN STORM PETRELS to come in close. A few COMMON DOLPHINS were seen but more exciting were three RISSO'S DOLPHINS! There were a few COMPASS JELLYFISH and some WHITING that were caught by the fishermen on board.

A SOOTY SHEARWATER powered through heading south and a few KITTIWAKE and GANNETS also were seen. Whilst we were scanning the waters, the local fishermen landed their first BLUE SHARK of the evening but this was just a very small young individual.

As the evening wore on, they caught another seven BLUE SHARKS which they tagged with the largest being around 35kg.

The shout went up for a WILSON'S STORM PETREL which came in from the north and carried on straight through.

We then returned after what had been a good evening and our first taste of Scilly Pelagics!


Saturday 13th August 2016
After a hearty breakfast we had some spare time before heading back down to the quay for the all-day pelagic.

Setting sail at 11am, our choices for the day were to either head eastwards to the area around Longstones reef or to try and intercept trawlers that were around 20 miles offshore.

The group opted for the former plan and we headed off to see what we could find! Large groups of SHAGS were seen on the rocks at the northern end of St. Mary's.

As we made our way out, our first pods of COMMON DOLPHINS were seen and we enjoyed excellent views as they rode the waves in front of us. We streamed and chummed along the route which attracted quite a few gulls and our first EUROPEAN STORM PETRELS of the day were noted along with GANNETS and FULMARS.

During the next few hours we intercepted several trawlers as they were conveniently in the area. Some MANX SHEARWATER flew past and constant scanning produced a few HARBOUR PORPOISE plus GREAT SKUA and a superb BALEARIC SHEARWATER close to the boat.

As we moved around the area, we spotted a RISSO'S DOLPHIN and with expert manoeuvring, had superb views when it came so close you could hear as it as it took in air!

Just when things were quietening down, Steve spotted an incoming GREAT SHEARWATER that flew past the boat giving good views, to the delight of the group.

A MINKE WHALE was also seen, plus yet more COMMON DOLPHINS as well as several OCEAN SUNFISH and a couple of BLUE SHARKS. An adult ARCTIC SKUA came in across the bows and harassed the gulls before vanishing.

A small passerine was seen coming towards the boat whilst we were midway between Scilly and Cornwall and it turned out to be a male GREENFINCH!

Using the radar equipment it became apparent that a French trawler was operating the area so we headed off to see if it would produce any seabirds.

Luckily for us, there were a large number of GULLS plus FULMARS, GANNETS and EUROPEAN STORM PETRELS lingering for us to look through. A SOOTY SHEARWATER gave good views as it flew alongside the boat and a few minutes later the shout went up for an adult SABINE'S GULL that gave prolonged views and delighted everyone.

It was then time to head back as we had travelled over 20 miles offshore and it would take quite a while to return.

We came back via the channel between St. Martins and Tresco and on the cliffs was an adult HOODED CROW which has been frequenting the islands and last seen by us on Bryer during our Autumn tour to the islands. The local SANDWICH TERNS accompanied us back into harbour and to round off the day we found an adult MEDITERRANEAN GULL.

After arriving back, we had some time to freshen up before meeting for a lovely evening meal in one of the local pubs.


Sunday 14th August 2016
With an earlier pelagic planned for the day we had an early breakfast and headed on down to the quay. The weather forecast was for a lovely day with light winds that meant we would probably struggle to find petrels or shearwaters.

The plan was to head south and then west towards Poll Bank in the hope that we may pick up a passing bird or two. We started off with a nice pod of COMMON DOLPHINS that gave good views alongside the boat plus a superb OCEAN SUNFISH that we could almost touch.

Joe started fishing to try and catch some shark bait and he caught a good number of POLLACK including some big individuals.

A few EUROPEAN STORM PETRELS came in to investigate and a lone SOOTY SHEARWATER came through but didn't stop. The usual suspects of HERRING, LESSER BLACK-BACKED and GREAT BLACK-BACKED GULLS followed the boat along with GANNETS and FULMARS.

Another SOOTY SHEARWATER was seen, sat on the water and when it flew, we all had good views and plenty of photographs were taken.

As we neared around 1pm a large feeding flock of GANNETS were spotted so we headed towards them and found a lovely large pod of COMMON DOLPHINS which showed superbly alongside the boat.

The rest of the afternoon was rather quiet apart from a few ARCTIC TERNS feeding nearby.

We arrived back at the harbour on time to enable those on the boat to catch the Scillonian back to the mainland and some of us took a walk to Lower Moors where we watched a fine GREENSHANK before heading back to base via Old Town Cemetery where we had a look a past Prime Minister Harold Wilson's grave.

A quick look at Porthcressa Bay produced around 100 SANDWICH TERNS roosting on rocks before we headed back for a shower before dinner.


Monday 15th August 2016
Our last day on St. Mary's was spent exploring some of the best birding areas, which began with a PEREGRINE over Porthcressa beach before we walked up towards Porthellick. A male CHIFFCHAFF flitted around the Elms and a COMMON SWIFT flew south over the road.

From the hides at Porthellick, were a couple of GREEN SANDPIPERS along with three DUNLIN, around eight GREENSHANK and a COMMON SNIPE feeding in the shallow margins.

Down in Porthellick Bay were two more GREENSHANK feeding as the tide receded. Our walk took us up past the airfield where a COMMON REDSTART was seen briefly in the pines and eventually we reached Old Town where we stopped for a drink at one of the cafes before wandering back into Hugh Town.

After lunch, we made our way towards the quay ready for our crossing back to the mainland.

The crossing was pretty good considering the windy conditions and it produced many MANX SHEARWATERS especially close to the Cornish coast plus FULMARS, GANNETS and a few COMMON DOLPHINS.

We arrived back in Penzance and collected our bags before heading off after what had been a great weekend with some superb birding, great weather, food, drink and company!