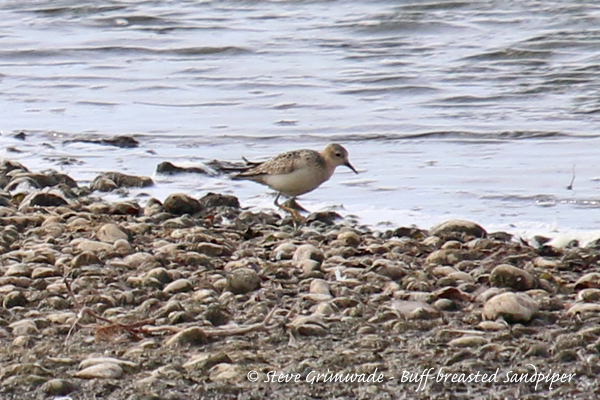 With a bad weather forecast in the north of East Anglia, we made the decision to head south into Kent. A couple of RING-NECKED PARAKEETS were seen as we reached the Dartford crossing and after a brief stop we arrived at Dungeness RSPB reserve.

Our first port of call was the Makepeace Hide which overlooks Burrowes Pit and we soon found our target, a fine BUFF-BREASTED SANDPIPER! The bird was quite mobile in blustery conditions but with patience we managed good views especially when it landed close to us.

Other waders present on the pit included LITTLE STINT, RINGED PLOVER, COMMON SANDPIPER, RUFF, DUNLIN, SNIPE and two BAR-TAILED GODWITS whilst up to five BLACK TERNS fed over the pit and a BLACK-NECKED GREBE was seen over the far side of the water.

Delighted with the sandpiper, we moved over to the ARC pit and walked down to the hide. A good number of GOLDEN PLOVER were seen plus RINGED PLOVERS but no sign of a reported Curlew Sandpiper. Several MARSH HARRIERS flew over the bushes and reeds and a HOBBY was also noted.

Two more BLACK-NECKED GREBES bobbed around on the open water before we headed back over to Boulderwall Farm for lunch. More MARSH HARRIERS were seen but the highlight was a CATTLE EGRET seen briefly in flight alongside a LITTLE EGRET for comparison.

We then went down to the sea for a spot of seawatching but apart from lots of SANDWICH TERNS and a single GANNET, it was rather quiet.

With the weather due to deteriorate late afternoon we drove north to Oare Marshes where we spent a very enjoyable afternoon. Up to 11 CURLEW SANDPIPERS were present with the same number of LITTLE STINTS plus a supporting cast of both BAR & BLACK-TAILED GODWITS, RUFF, RINGED & GOLDEN PLOVERS, TURNSTONE, REDSHANK, GREEN SANDPIPER, SNIPE and AVOCET amongst others.

A walk to the river produced a fine PEREGRINE that was terrorising the waders plus COMMON BUZZARD, COMMON TERNS and a flock of TURNSTONE.

Back along the road, we were watching the waders when a flock of terns flew past and on closer inspection, they contained around nine BLACK TERNS!

As we left the site, the rain started to fall and we all said how lucky we had been with the superb birds and lovely weather!