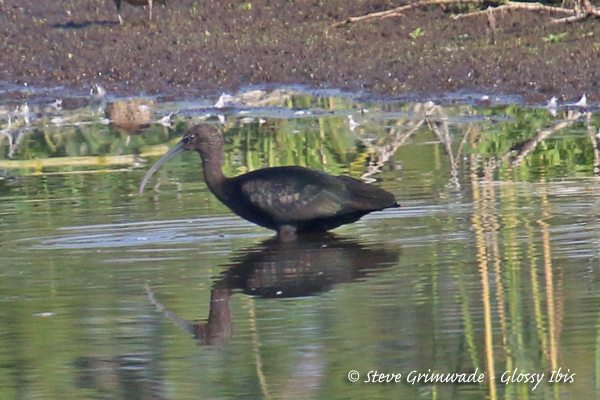 With sunny weather forecast and light southeasterly winds we decided to head north and our first site was Strumpshaw Fen RSPB reserve where as we strolled around the trails, it became apparent that there was a good number of migrant CHIFFCHAFFS about, as the willows bordering the River Yare were full of them! Several MARSH TITS were seen with a LONG-TAILED TIT flock.

From a viewpoint along the path we found the long-staying juvenile GLOSSY IBIS feeding in the shallows where it gave good views, plus a few WATER RAILS skulked along the reedy edge.

Some time was spent in the Tower Hide where lots of GREYLAG GEESE were seen plus RUFF, GREEN SANDPIPER, SNIPE and two HOBBIES which hunted dragonflies over the reed-beds.

As we left the hide, a real surprise was a SWALLOWTAIL BUTTERFLY that drifted over several times!

A kettle of COMMON BUZZARDS were seen on the morning thermals and as it warmed up, we took a walk to a pond and found several WILLOW EMERALD DAMSELFLIES on the wing.

After lunch in the van we drove northeastwards to Winterton and began the long walk to the northern dunes. Quite a few WHEATEAR and STONECHAT were seen plus GRAYLING, SMALL COPPER, SMALL HEATH, SMALL TORTOISESHELL and a PAINTED LADY were noted.

Eventually after around two miles we found the juvenile RED-BACKED SHRIKE perched up on a small area of bushes and although the bird was quite mobile we enjoyed good scope views. On the way back we found two WHINCHATS perched on a fenced off area.

It was a relief to get back to the carpark for a welcome drink or ice cream and a rest. A look over the sea produced a feeding flock of GANNETS plus ARCTIC & GREAT SKUAS and a RED-THROATED DIVER moving northwards.

Just as we were about to leave, three adult MEDITERRANEAN GULLS flew over which pleased Steve no end!
We rounded off the day at Blythburgh in Suffolk where we found a juvenile OSPREY perched in a dead tree and although distant, all the plumage details could be picked out. Other species here included GREENSHANK, BAR & BLACK-TAILED GODWITS and many REDSHANKS.