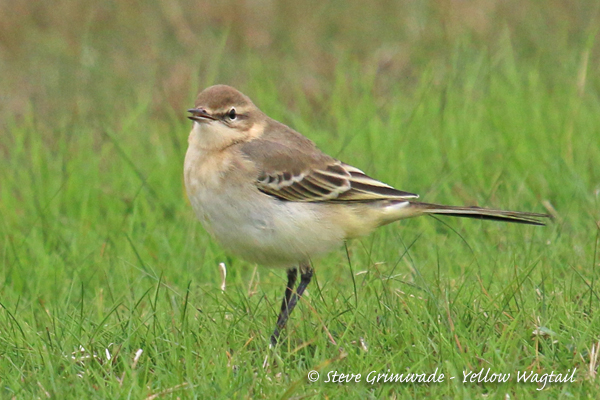 Saturday 24th September 2016
We left our base in Essex bright and early for our journey north to Yorkshire which produced seven RED KITES close to Peterborough as well as a single COMMON BUZZARD. After a couple of stops we arrived at Flamborough Head and made our way down to the Golf Course willows where we soon heard the "tsooeet' call of a YELLOW-BROWED WARBLER.

After some patience we obtained views of two birds with a third bird calling behind in an area of sycamores. As well as the Yellow-browed Warblers we also had good views of a lemony yellow juvenile WILLOW WARBLER plus CHIFFCHAFF.

With our stomachs rumbling we headed back to the van for lunch before walking to the lighthouse for a scan of the sea. Lots of GANNETS were passing by plus quite a few SHAGS heading to the south.

Our walk took us round the south side of the headland where a male KESTREL was watched hunting whilst on the sea was a RED-THROATED DIVER. The strong southerly wind made birding difficult but along Old Hall hedge we found a small flock of TREE SPARROWS.

Once reaching the main road we came across a group of birders who were watching a TAIGA BEAN GOOSE amongst the GREYLAG GOOSE flock, which was a good bird for the area. As we moved on, a juvenile SPARROWHAWK was seen disturbing the MEADOW PIPITS on the golf course.

By now we were gasping for a cuppa so we stopped off at one of the cafes for a rest. This proved a good move with two ARCTIC SKUAS passing by offshore. With some time spare we visited Thornwick Pool which held quite a few TEAL and a single DUNLIN.

We then headed to the hotel and checked in with some time to relax before meeting for dinner and we didn't go hungry with the large Yorkshire portions we were served!


Sunday 25th September 2016
We met for breakfast at 8am which certainly set us up for the day. A couple of us explored the hotel grounds and found several CHIFFCHAFFS amongst the more common species.

Whilst loading up the van, we had views of a circling SPARROWHAWK plus a fine MISTLE THRUSH perched in a tree.

We then made the short hop northwards to Bempton Cliffs RSPB Reserve where soon after parking, we heard the unmistakeable call of a YELLOW-BROWED WARBLER. With some patience we had brief views of a couple of birds with more calling behind us. A couple of CHIFFCHAFFS were seen but the most numerous birds here were TREE SPARROWS.

In the feeding area we came across a male BLACKCAP foraging high in an Elder bush before dropping away out of site. We then walked through the smart new visitor centre and spent time scanning the sheltered edge of the woodland where at least four more YELLOW-BROWED WARBLERS were heard.

Seeing them was a different matter although we did have brief views of several birds flitting through the willows and sycamores. After a while we decided to take a walk around the nature trail to look for other migrants that may have filtered down the coast since the north-easterly winds earlier in the week.

A WHITETHROAT was seen briefly in a bramble hedge but the best birds were two WHINCHATS that perched up allowing good views. Time was then spent watching the large numbers of GANNETS that still had chicks on the vast cliffs as they moved to and fro.

FULMAR, SHAG and a small flock of CORMORANTS were seen before we took a walk back to the centre where another look for YELLOW-BROWED WARBLERS took place. Two birds were seen together briefly before we opted to have a hot drink in the cafe.

After lunch in the carpark, we headed north to Filey and made a stop at the excellent Filey Dams Nature Reserve. From the first hide we found a good number of waders including seven COMMON SNIPE, GREEN SANDPIPER, DUNLIN, CURLEW, LAPWING and a juvenile BLACK-TAILED GODWIT.

Amongst the roosting gulls was a first winter COMMON GULL and SHOVELER were spotted feeding with the MALLARD & TEAL.

It was then off to Filey Country Park where we explored Carr Naze and the Brigg. A DUNLIN was feeding on a small pool beside the carpark and flocks of GOLDFINCHES and an occasional LINNET were seen.

The wind had picked up once again and it was pretty breezy up on the top but we persevered and found a couple of WHEATEARS on the sheltered slopes. Down on the rocks we added a good selection of waders to our list including four PURPLE SANDPIPERS, KNOT, RINGED PLOVER, REDSHANK, OYSTERCATCHER and TURNSTONE.

A LITTLE EGRET drifted by whilst offshore we found a pair of COMMON SCOTER plus HARBOUR PORPOISE feeding in the bay.

We took a look at the bushes but it was quiet so we made our way back to base after what had been another good day.

Our evening meal was once again well received and we headed off to bed to get some rest.


Monday 26th September 2016
We had breakfast at the earlier time of 7.00am to enable us to spend as much of the day birding before returning home. The journey down to Spurn Point was slow and winding but we arrived just after 9.00am and parked up by the Bluebell Cafe.

Our walk took us down the road towards the Canal Scrape and Hide which was timed well as it started to rain. A couple of DUNLIN fed close to the hide and amongst the many MEADOW PIPITS moving south were two YELLOW WAGTAILS. A scan of the bushes produced a female-type COMMON REDSTART flicking from tree to tree.

SWALLOWS and HOUSE MARTINS moved through in reasonable numbers as we continued our walk. A couple of WHINCHATS brightened up the dull morning and a scan of the River Humber mudflats produced GREY and GOLDEN PLOVER, SHELDUCK, BLACK-TAILED GODWIT, CURLEW, REDSHANK and many more.

We wandered over to the sea-watching hide where three COMMON EIDER flew south but apart from that it was rather quiet. After chatting to local birders we retraced our steps as the rain had started to fall once again. A REED WARBLER was seen feeding in a Hawthorn bush before vanishing into deep cover.

Steve returned to the van so he could drive to pick up the rest of the group from the Canal Scrape Hide. On his walk he saw more WHINCHATS plus a flyover GREY WAGTAIL.

On his return, he walked into the hide to find out a JACK SNIPE and WATER RAIL had been seen! Typically, they didn't show again so with the weather not looking good, we headed off on the first part of our journey home.

With just a small amount of time spare, we made the decision to head to Alkborough Flats Nature Reserve to attempt to try and find the long-staying Purple Swamphen.

As we parked up, skeins of PINK-FOOTED & BARNACLE GEESE flew over calling which was a good start. We found a watch-point overlooking the reserve but despite a really good look, the bird wasn't seen. We did however find four roosting SPOONBILL plus MARSH HARRIER, PINTAIL, SPOTTED REDSHANK, WIGEON and lots of AVOCETS.

We reluctantly headed off and began our journey eastwards, arriving early evening after what had been a lovely weekend away with some good birds despite the non-favourable weather!