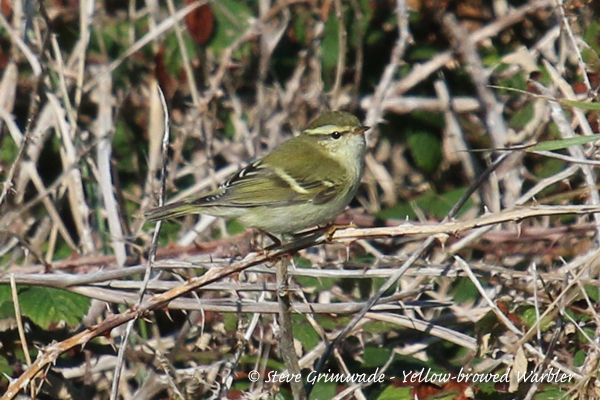 Today was very different weather-wise, but once again we headed back to Norfolk. With the winds coming briskly from the northwest, we drove to Cley beach and could see GANNETS before getting out of the van!

Spending about an hour and a half sea-watching produced lots of GANNETS plus around 18 GREAT SKUA, six MANX SHEARWATER, RAZORBILLS, GUILLEMOTS, EIDER, RED-THROATED DIVERS plus best of all were three LONG-TAILED SKUAS.

After a quick toilet stop at Cley we popped into Stiffkey marshes for lunch where another GREAT SKUA battled across the saltmarsh disturbing the GOLDEN PLOVER along the way.

Our next port of call was Holkham pines where we took a stroll along the southern edge towards Wells Woods. After seeing absolutely nothing, Steve picked up the call of a YELLOW-BROWED WARBLER in the bushes nearby but despite it calling constantly we just couldn’t see it!

Moving on, we met a few other birders who put us onto a couple of newly-arrived BRAMBLING in the pines before Steve found the YELLOW-BROWED WARBLER flitting around a Hawthorn. After some patience, we all got good views as it did a little circuit of the area with another bird calling nearby, so we knew there were at least two birds.

The grazing marsh held a few PINK-FOOTED GEESE and with some time spare, we headed to Titchwell for an hour or so. There was still no sign of the Pectoral Sandpiper but we did enjoy good views of both LITTLE STINTS and CURLEW SANDPIPERS plus many other waders all in beautiful light.

As we returned to the carpark, our first two REDWINGS of the autumn dropped into the bushes which were good to see.

We arrived back after a minor diversion in good time, with everybody having had a good day out birding!