WHERE THE PAGER TAKES US – OCTOBER SPECIAL
Saturday 22nd October 2016 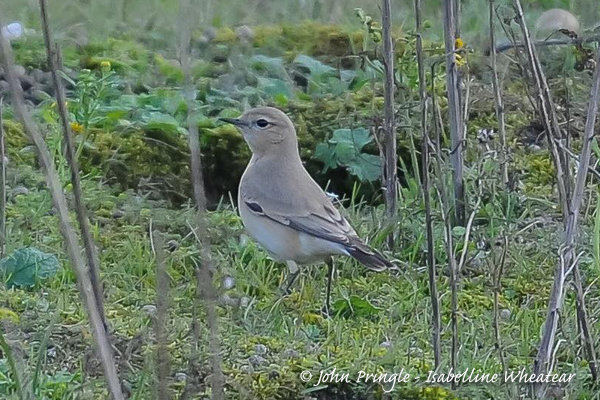 Our day kicked off at Needham Market where we spent time looking for the reported Black-bellied Dipper without luck, although we did add SISKIN, KINGFISHER and GREY WAGTAIL to our lists.

It was then off for a spot of breakfast and just as we finished eating the pager Mega’d with an Isabelline Wheatear! As this was a new UK bird for many of us, it was a no-brainer and we began the journey northwards.

Arriving in good time we parked in the village by the boats. There was a procession of birders heading out to the dunes and we caught up with one or two familiar faces.

Three quarters of the way out Steve decided to go back and move the vehicle as the tide looked higher than usual! The rest of the group carried on eventually reaching the spot where the crowd gathered and it didn’t take long before the ISABELLINE WHEATEAR was seen on top of the dunes where it gave good views!

The influx of birders had discovered some other good species including two WAXWINGS that posed well on top of brambles before flying off westwards.

Much more elusive was a PALLAS’S WARBLER that stubbornly refused to show itself completely, but flitted amongst dense clumps of Elder and Privet where some of the group had reasonable views.

With time getting on, we set off in search of a SHORELARK which was soon spotted on the edge of the dunes where it showed well as it fed on seeds in front of us.

The walk back produced lots of PINK-FOOTED GEESE along with two EUROPEAN WHITE-FRONTED GEESE, a single BARNACLE GOOSE and the usual GREYLAGS and EGYPTIAN GEESE.

Wells was our next port of call but just for toilets and a hot drink, but a RED KITE along the way was a bonus.

With a little time left, we headed back through the Brecks, stopping off to see Stone Curlew but to no avail, although we did find a nice covey of GREY PARTRIDGE which rounded the day off nicely.