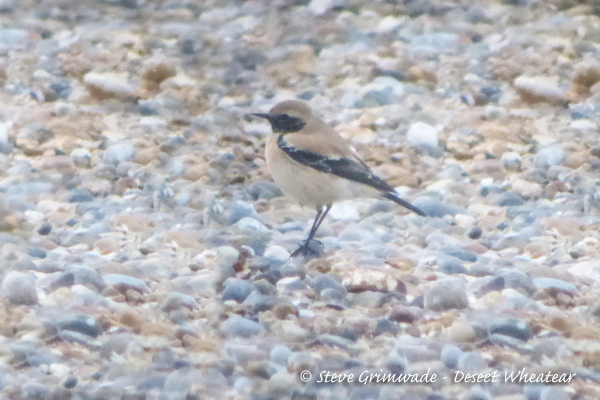 Our day kicked off locally with a visit to Colchester Hythe where a Daurian Shrike had spent the previous couple of days. We were there early on but despite an extensive search, the bird had done a Friday night flit! We did see several KINGFISHERS plus ROCK PIPIT, COMMON BUZZARD, SPARROWHAWK and a few STONECHATS.

From here we headed northwards to Norfolk and Burnham Overy Dunes to look for the ISABELLINE WHEATEAR that we caught up with the previous week. The walk out produced a couple of BEARDED TITS plus skeins of PINK-FOOTED GEESE coming in to the fresh marsh.

At the end of the boardwalk in a bush on top of the dunes, David, Avis and Annette had brief views of a probable Eastern race LESSER WHITETHROAT. Further out in the dunes, the wheatear had gone missing but with patience we were rewarded with good scope views as it flitted around the sandy slopes. It fed on caterpillars and despite being chased around by others, we enjoyed watching the bird with a small crowd of birders.

Heading back to the boardwalk we were delighted when Steve picked up a SHORT-EARED OWL that flew right past us and over the saltings where it flushed hundreds of feeding passerines and roosting waders!

Delighted by this we made the long walk back and spotted a BARN OWL hunting in a nearby field whilst a COMMON BUZZARD looked on from its perch.

Back near the village we noted a small number of REDWINGS and BLACKBIRDS feeding in the hedge.

It was then off to Salthouse where we endured another long walk and this time on shingle! The target was a super male DESERT WHEATEAR which although not close, gave superb scope views as it flitted around catching insects. At times it was seen alongside a STONECHAT which it did not tolerate!

With time getting on, we returned and noted GANNET, GUILLEMOT and RED-THROATED DIVER on the sea whilst a PEREGRINE caused havoc on the grazing marsh rounding of the day nicely.