WINTER BIRDING ON THE ISLE OF SHEPPEY
Saturday 19th November 2016 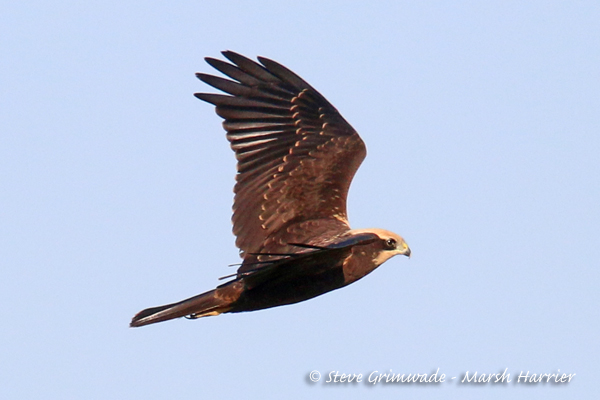 Our day kicked off at Leysdown-on-Sea where we had great views of two BEARDED TITS in a reed-fringed ditch close to the road. Good numbers of waders were present on the mudflats and included SANDERLING, DUNLIN, OYSTERCATCHERS, BAR & BLACK-TAILED GODWITS whilst on the sea we located both GREAT CRESTED GREBE and RED-THROATED DIVERS.

On moving south to Shellness we had another look at the sea and mudflats which added AVOCET, RINGED PLOVER and TURNSTONE to our lists whilst good numbers of STONECHAT fed in the morning sunshine.

Taking a walk out along the sea wall we had good views of around 10 MARSH HARRIERS, plus about six COMMON BUZZARDS and a few KESTRELS. A hunting female MERLIN gave fantastic views as it tried to catch STARLINGS before giving up and landing on a post in front of us!

Other goodies here included a few WHITE-FRONTED GEESE plus a juvenile PEREGRINE that perched on a metal fence.

We went back up to the road and a look at the gulls yielded an adult MEDITERRANEAN GULL roosting with HERRING, COMMON and BLACK-HEADED GULLS.

With our stomachs rumbling, we drove down towards Capel Fleet noting a few RED-LEGGED PARTRIDGE on the way and we soon came to a halt when we spotted a starling-sized bird with a crest sitting on roadside wires. We had great views of this lone WAXWING until traffic forced us to move on.

Delighted with this, we headed to our lunch spot but not before having good views of an adult COMMON CRANE as it fed with MUTE SWANS.

Suitably replenished, we spent the rest of the afternoon around the area and noted many more MARSH HARRIERS including at least 25 in the air at once! Other species here included CORN BUNTINGS, GREEN SANDPIPERS, COMMON SNIPE, PEREGRINE, another female MERLIN and as light dropped we were treated to views of both BARN & SHORT-EARED OWLS plus ringtail HEN HARRIER.

With light rain starting to fall, we headed back to the van for coffee and cake before making our way home after a fantastic day on the Isle of Sheppey, now one of Britain's premier raptor-watching spots.