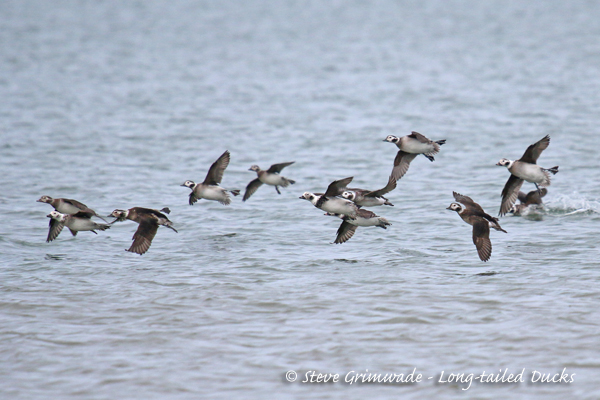 With rain forecast for later we began our day in Norfolk at the Titchwell RSPB reserve. A female BRAMBLING was seen on the feeders along with CHAFFINCH, GOLDFINCH & GREENFINCH. As we wandered along the path we watched a WATER RAIL creeping through the undergrowth just feet from path which was good to see.

A quick look on the fresh-marsh yielded a fine adult YELLOW-LEGGED GULL which gave good views as it swam in the deep water before taking off and giving a lovely fly past. Then it had the decency to land on a small mud island so we could see its legs!

We headed straight towards the sea and on reaching the sea pool we had stunning views of another WATER RAIL in full view. It proceeded to swim towards us before disappearing under the bank below us.

Reaching the sea, the tide was coming in nicely and we saw a group of around 20 LONG-TAILED DUCKS which gave good scope views before drifting off westwards. We spent some time enjoying the good numbers of seaduck which were mostly COMMON SCOTER with around seven VELVET SCOTER, three SCAUP and GOLDENEYE thrown in for good measure.

Flocks of KNOT flew past along with SANDERLING, GREY PLOVER and BAR-TAILED GODWIT plus a single adult GANNET flew westwards. We were then in for a real treat when a flock of LONG-TAILED DUCK flew past, giving superb views and landing close by which was just magical!

With time slipping away we strolled back along the path noting SPOTTED REDSHANK feeding on the saltwater pools along with several BLACK-TAILED GODWITS. The freshmarsh held large numbers of GOLDEN PLOVER plus PINTAIL, SHOVELER, TEAL, WIGEON, SHELDUCK, MALLARD, GADWALL and flocks of PINK-FOOTED & BRENT GEESE flew over.

A brief look at the drained saltmarsh pool provided us with a feeding WATER PIPIT that was seen with a MEADOW PIPIT and PIED WAGTAIL for good identification comparison.

As we passed through the visitor centre we had another look at the feeders and this time there was a male BRAMBLING.

We tucked into lunch and then headed off south to Sculthorpe Moor reserve where we spent the remainder of the afternoon in gloomy conditions with spots of rain.

Some of the highlights included TREECREEPER, NUTHATCH, BRAMBLING, MARSH TIT plus yet another WATER RAIL!

The day concluded by the centre with mince pies and chocolate tiffin, washed down with a hot drink before starting our drive home.

We had been very lucky with the weather as on the journey home the roads were soaked by downpours in other areas. It had been a cracking day with some brilliant birding along with lovely company!