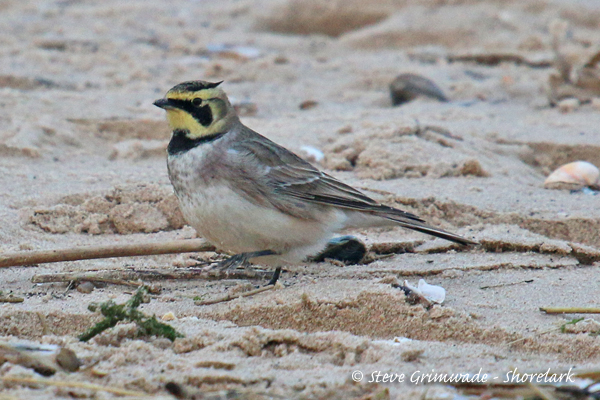 Our day began on the north coast at Titchwell RSPB reserve where the path towards the visitor centre produced both SISKIN and LESSER REDPOLL plus a male BRAMBLING feeding in the Alders bordering the track.

Our walk took us straight towards the sea but we were waylaid with a small wisp of COMMON SNIPE on the saltmarsh, whilst on the freshmarsh were hundreds of TEAL, MALLARD, GADWALL, WIGEON and SHOVELER.

Eventually we reached the sea and spent a very enjoyable time scanning through the large numbers of seaduck offshore. The majority of the birds were COMMON SCOTER with around 400 birds present and approximately 30 VELVET SCOTER plus 40 LONG-TAILED DUCKS, GOLDENEYE, 12 EIDER, RED-THROATED DIVERS and a single GUILLEMOT.

The shoreline held BAR-TAILED GODWIT, KNOT, SANDERLING, TURNSTONE and OYSTERCATCHERS whilst the salt-water pool held BLACK-TAILED GODWIT and SPOTTED REDSHANK before we strolled back to the visitor centre.

A brief stop to overlook the freshmarsh produced a superb adult YELLOW-LEGGED GULL that was very likely to be the bird we had seen the previous week.

As we neared the visitor centre a WATER RAIL showed well in the ditch close to the path.

We had lunch before moving eastwards towards Holkham and a small flock of EUROPEAN WHITE-FRONTED GEESE fed close to the road but unfortunately we could not stop.

As we reached Holkham, a BARN OWL was seen perched in a tree close to the road. A small party of PINK-FOOTED GEESE showed well nearby before we walked out towards the sea.

A good number of LINNETS flew past and eventually we reached an area where up to 24 SHORELARKS fed on the tideline giving some great views. It was superb to see these now scarce winter visitors foraging on the beach before they were flushed by a dog. The walk back produced either a BLACK BRANT or a BLACK BRANT x DARK-BELLIED BRENT GOOSE hybrid.

With time getting on we concluded the day overlooking the marsh, noting quite a few MARSH HARRIERS plus thousands of PINK-GOOTED GEESE as they came in to roost.

It wasn't long before the light faded and we started our journey home. The only bird of note being a single WOODCOCK, seen flying past just south of Wells.

We arrived back after what had been a great day of birding on the north Norfolk coast and one that rounded off the Swallow Birding year with style!