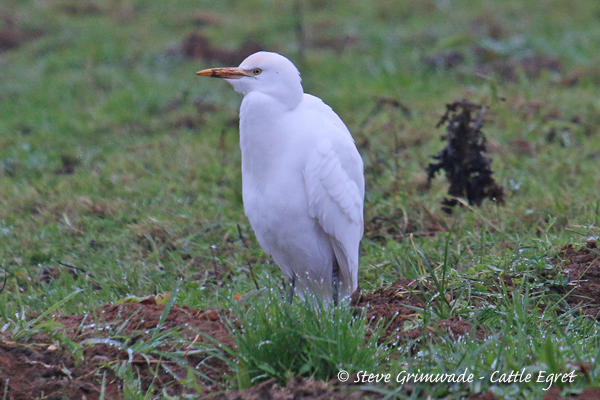 We started our day in South Suffolk at Rendlesham where we began our search for a flock of Waxwings that had been reported a few minutes before our arrival. This was slightly waylaid when a reporter from BBC Suffolk asked if we would mind being interviewed on the subject. Of course we obliged and afterwards took a different route and lo and behold there were 31 WAXWINGS perched in a nearby tree!

Although the light was dodgy, we had some good views before we left them in peace and headed off northwards.

Our next port of call was Iken and within a few minutes we were watching a superb CATTLE EGRET that was feeding alongside a LITTLE EGRET for excellent ID comparisons. It strutted around the Redpoll Cattle without a care in the world and offered excellent photographic opportunities.

With the weather not looking too good we dropped in to Dunwich Heath and headed out to look for DARTFORD WARBLERS which duly obliged until a SPARROWHAWK came powering through. Back at the cliffs were a large flock of around 250 COMMON SCOTER constantly diving off-shore.

At nearby Kessingland, a wintering PALLAS'S WARBLER had been discovered the previous day so it would have been rude not to drop by, but it decided not to play ball for all of us although two members of the group had really good views! We did however find a small flock of CHIFFCHAFFS, TREECREEPER, GREAT SPOTTED WOODPECKER, GOLDCREST, BULLFINCH and LONG-TAILED TITS.

A stop in Lowestoft produced four SHAGS on Lake Lothing before concluding the day at Ness Point where a couple of PURPLE SANDPIPERS showed well from the van while it was raining.

Despite the weather we kicked off our 2017 day trips in style with some great birds along with superb company!