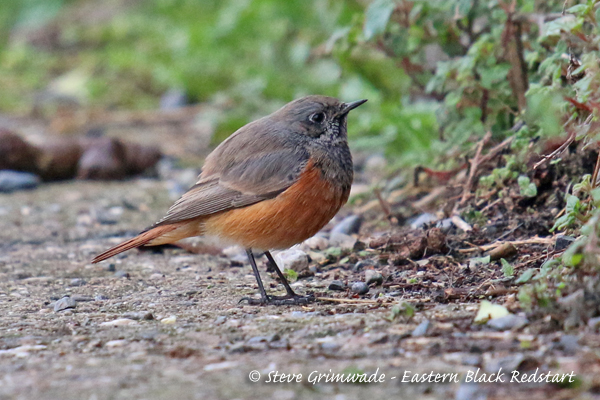 Saturday 14th January 2017
We left our base bright and early and after pickups along the way we headed westwards. As it was getting light, we noted our first COMMON BUZZARDS of the tour and a short while later, our first RED KITE drifted over the M25.

A refreshment stop was made along the M4 and then we continued the journey with more RED KITES and a flock of around 60 RING-NECKED PARAKEETS.

We made good time reaching Exeter just after twelve and headed south to a hillside overlooking the sea. Almost immediately a male CIRL BUNTING was seen in a nearby hedgerow before vanishing from view. A scan of the sea yielded around 20 EIDER which were mostly in immature plumage before we strolled down the hedgerow.

It was with huge delight that around 50 CIRL BUNTINGS foraged in the hedge and occasionally they would be disturbed in the stubble fields, flying up into the hedge where we had great views.

After lunch in the van we drove southwards to the coastal village of Thurlestone, where after parking we wandered to the coast noting STONECHAT along the way. A few moments later we were enjoying a cracking 1st winter male DESERT WHEATEAR that put on a show. This rare species had been present for over 60 days, already attracting quite a few admirers.

It was unfortunately time to leave as we planned to arrive at the hotel around dusk and the birds of note during the journey were a female GOOSANDER, COMMON BUZZARDS, FIELDFARE and our first STARLINGS of the tour!

We arrived at the hotel in good time and after unloading had some time to unpack and settle in before meeting for our evening meal and to complete the bird list.

Our meal went down well and we headed off to bed very happy after our first day in the southwest.


Sunday 15th January 2017
We met for breakfast which was excellent, setting us up for our day of birding. Our first port of call was the fishing village of Mousehole where an Eastern Black Redstart had taken residence. After parking up we strolled down to a rocky area and soon located the EASTERN BLACK REDSTART hopping around right in front of us.

This rare species that normally lives in areas such as Central Asia gave us some superb views as it fed on the rocks, often in the company of a ROCK PIPIT.

A scan out to sea produced four FULMAR plus MEDITERRANEAN GULL and lots of GANNETS whilst the surrounding rocks held both PIED and GREY WAGTAILS and a couple of WRENS.

With the tide dropping, we drove to Penzance and stopped close to the Jubilee Pool which is a good vantage point to scan the bay. As we walked along the promenade, a PURPLE SANDPIPER flew past along with a single TURNSTONE.

The brisk northwesterly wind made the sea quite choppy but we managed to find several GREAT NORTHERN DIVERS plus a flock of COMMON SCOTER. Further scanning produced three VELVET SCOTER in the distance.

A KINGFISHER zipped past before flying back and landing on the rocks below us where it gave good views. With the tide dropping rapidly, many waders were seen including SANDERLING, TURNSTONE, DUNLIN and eventually a couple of PURPLE SANDPIPERS dropped in below us.

After a brief stop for facilities we drove round to Marazion where we took a walk along the beach to check out the bay east of St. Michael's Mount where a report of a Pacific Diver had just come through.

Despite spending some time there, we could only manage to find three BLACK -THROATED and a GREAT NORTHERN DIVER. A female-type BLACK REDSTART was seen briefly and good numbers of ROCK PIPITS frequented the beach.

With our stomachs rumbling we left the area and drove up to Hayle for a visit to the famous Philps Pasty Shop! Whilst tucking into our hot lunch, we had some rather close views of JACKDAWS, ROOKS and HERRING GULLS eyeing up our food.

Afterwards we visited Copperhouse Creek briefly where we found GREENSHANK and GREY PLOVER before moving to the Hayle Estuary and here we took a walk to the causeway where the tide was low. There were hundreds of TEAL present and luckily for us, some locals put us onto the drake GREEN-WINGED TEAL which gave beautiful views in the afternoon sunshine.

We popped into Ryan's Field hide briefly where it was rather quiet although a lone BLACK-TAILED GODWIT made it onto our lists.

With some time remaining, we spent the remainder of the day back at Marazion with a visit to the RSPB reserve. The wind was pretty gusty and chilly as we overlooked the reserve, noting lots of COMMON SNIPE whilst both CETTI'S WARBLERS and WATER RAILS called from deep in the reed-beds.

The main highlight was over 50,000 STARLINGS that put on a real show as they wheeled around the sky attracting the attention of up to three COMMON BUZZARDS.

With the light going, we headed back to base after what had been a great day of birding.


Monday 16th January 2017
We met for breakfast at the usual time and afterwards drove straight to Marazion for another crack at the Pacific Diver. A quick stop at Long Rock Pool produced a very interesting gull and a few photographs were taken before it decided to fly off!

At Marazion beach, despite a very thorough search, we only managed to find around eight GREAT NORTHERN DIVERS out in the bay.

Other species noted were four MEDITERRANEAN GULLS, GREY PLOVER, TURNSTONE and lots of SHAGS feeding as the tide receded.

Our next site was the village of Perranuthnoe where a relaxed stroll was taken along the southwest coastal path. It was sheltered from the brisk northwesterly breeze as we set up and started scanning the bay.

A female KINGFISHER was seen distantly and waders included CURLEW, GREY PLOVER, TURNSTONE and REDSHANK. Despite a thorough search, we couldn't find our target bird so we decided to wander a little further along the coast.

Whilst watching a group of TURNSTONE, a whistling call was heard and in flew a bird that turned out to be the HUDSONIAN WHIMBREL! We enjoyed great scope views of this North American vagrant as it fed amongst the rocks before going to sleep.

After around 10 minutes it flew off around the bay and vanished. We then walked a little further and checked out the bay looking back towards Marazion.

Once again, we only managed to find GREAT NORTHERN DIVERS in several sweeps of the water which was quite frustrating.

As we strolled back we could hear quite a commotion from the local CHAFFINCHES and BLACKBIRDS from a tamarisk hedge and on closer inspection, an 'eared' owl flew out and away.

Luckily we managed to locate the bird again in flight which turned out to be a superb LONG-EARED OWL, something we hadn't expected to see!

We walked back noting a small flock of REDWING and SONG THRUSH along the way plus STONECHATS by the carpark.

It was then onwards to Helston where we picked up lunch before heading to the boating lake to eat. There was no sign of the resident Whooper Swan although we did add COOT, TUFTED DUCK and SHOVELER to our lists.

After our food we took a look at the sewage works which offered sheltered conditions. There we had good numbers of CHIFFCHAFFS feeding around the machinery and GREY WAGTAILS were numerous too.

The hedgerow yielded GOLDCREST, LONG-TAILED TITS plus GREAT TIT as we checked out the small lane to find a couple of BULLFINCHES.

News then came through of ten Cattle Egrets to our south so we thought it would be rude not to make the effort to see them. The directions however were slightly misleading but luckily another birder put us onto them as they fed at the top of the field that was hidden from our view!

The ten CATTLE EGRETS fed unconcerned but were then disturbed and we had flight views from below.

With time getting on we made a visit to Kynance Cove in the hope of connecting with Chough. The weather was quite chilly with occasional drizzle but eventually we picked up two really distant CHOUGH flying over the headlands before landing in a field.

We then headed back to base after what had been a cracking day. After time for a hot shower we met for our evening meal which revived us after a long day in the field. After perusing the photographs during the evening, we came to the conclusion that the gull was a first-winter RING-BILLED GULL. A bird had been seen sporadically at Long Rock Pool and it matched photographs from the internet.


Tuesday 17th January 2017
We met for an earlier breakfast to give us a chance to fit some birding in on our way home.

The weather was drizzly and dull but with less wind than the previous day which made viewing tricky, but luckily the rain had stopped when we arrived at Dozmary Pool on Bodmin Moor.

It didn't take long before we located a drake LESSER SCAUP feeding out with TUFTED DUCKS at the southern end of the water. Despite being distant, the light was good and all the identification features were noted. Other species present included two female GOLDENEYE and a small party of TEAL.

With a long journey ahead of us, we stopped off in Exeter to pick up lunch which happened to coincide with Waxwings, reported the previous day.

After popping into the shop, we drove along an industrial estate road and imagine our surprise when there sitting on a tree was a lone WAXWING!

We managed to have close views as it dropped down to feed on ornamental shrubs.

Our last port of call was Matford Pools RSPB reserve where an American Wigeon had spent the last few weeks. On arrival there were no Wigeon to be seen and we thought we were going to be unlucky.

But luck was once again on our side, when one of the group saw a duck fly through a gap in the hedge. He went along the path towards another pool and found the bird on a small area of water and after a phone call, we came running to find it had disappeared behind sedges.

After a nervous wait after what seemed like forever, the bird finally showed its head! With patience the 1st winter drake AMERICAN WIGEON came out with WIGEON and gave some good views albeit a little distant.

Delighted by this we popped into nearby Exeter services for lunch and hot drinks which went down very well.

Afterwards we began our journey home and after a couple of hold ups, arrived back in Essex mid-evening after what had been a very successful tour with excellent birds seen, great sites, food and customers!