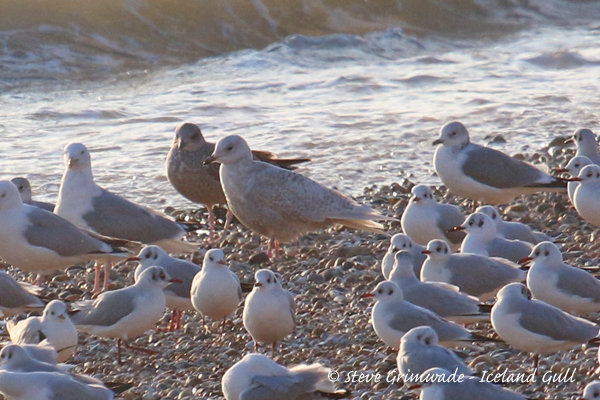 With cold, bright weather forecast we made our way south to Dungeness in Kent where we explored this wildlife-rich area. Starting off on the RSPB reserve we made our way around the hides and found a couple of redhead SMEW which gave good scope views. A female MARSH HARRIER caused havoc amongst the wildfowl as we reached Dengemarsh Hide and it wasn’t long before a GREAT WHITE EGRET flew into view landing amongst the reeds. Eventually it headed off south past the hide and was lost to view.

Along the track back towards the visitor centre we had excellent views of two pairs of BEARDED TIT as they fed silently in the reeds. A flock of around 150 STOCK DOVES flew around the northern end of the reserve along with about 40 LINNETS.

A drake SMEW showed well at the back of Hookers Pit before it was time to move onto the ARC pit. A quick stop to look over Cooks Pool produced the long-staying drake RING-NECKED DUCK plus a male STONECHAT.

At Bolderwall Farm, a quick check of the feeders yielded around 10 TREE SPARROWS, a rare sight now in the southeast.

Lunch was enjoyed sitting in the Hanson Hide overlooking the ARC pit where a good flock of GOOSANDER were seen plus another GREAT WHITE EGRET and a lone CHIFFCHAFF.

As we drove past New Diggings, two SLAVONIAN GREBES were seen although the light wasn’t great.

Afterwards we drove down to the power station to check out the beach for any interesting wintering gulls. What we hadn’t bargained on was the several thousand birds present over the bubbling water offshore making it difficult to scan through them all!

Perseverance was needed and it reaped dividends when a juvenile ICELAND GULL was spotted but getting everyone onto it proved tricky. Luckily for us, it landed on the beach where we were all able to get onto this smart bird.

With some time spare we headed round to Scotney Pits where a feral flock of BARNACLE GEESE were present, but further west a quick look amongst GREYLAG GEESE provided us with a sighting of five TUNDRA BEAN GEESE which soon flew off onto distant fields.

Our last port of call was a small lake just west of Camber Sands where we eventually located a winter-plumage RED-NECKED GREBE which showed reasonably well. We also managed flight views of at least two KINGFISHERS which concluded the day very nicely indeed!