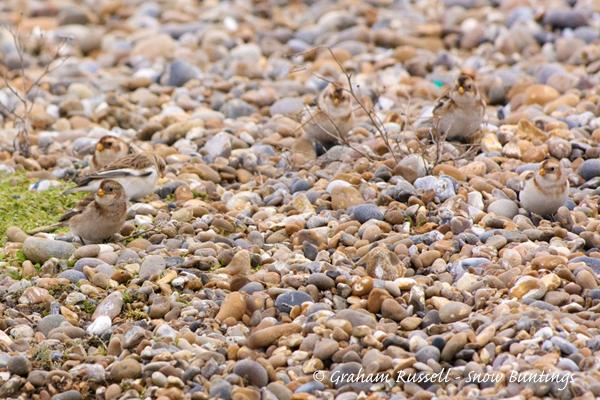 Our first port of call for the day was the beach between Aldeburgh and Thorpeness where a small party of Snow Buntings have been seen sporadically during the last few weeks. Our first sweep of the beach provided us with views of a pair of STONECHATS and with luck and perseverance we located 10 SNOW BUNTINGS flitting along the beach giving good scope views.

A quick look at North Warren RSPB reserve produced a flock of around 200 WHITE-FRONTED GEESE and amongst them were 22 TUNDRA BEAN GEESE which showed reasonably well on the marsh. Amongst the large numbers of Whitefronts were GREYLAGS and a few feral BARNACLE GEESE.

Moving on northwards to Sizewell we took a walk to the north and spotted a male and female BLACK REDSTART flitting around inside the nuclear power station compound. Whilst watching them we drew the attention of the Central Nuclear Constabulary but luckily they were more interested in seeing what we were looking at.

Lucky for us we were watching a male PEREGRINE FALCON perched on the building and we managed to get it in the scope for them!

It was then on to Minsmere where after lunch we took a walk down to the sluice. A GREAT WHITE EGRET was seen on the pool behind West Hide and down at the sluice, try as we might, we failed to find any scarce gulls amongst the thousands roosting on South Levels.

After a hot cuppa back at the centre we headed to Island Mere hide where the remainder of the afternoon was spent. Highlights included BEARDED TITS, six GOOSANDER, several brief BITTERN sightings, MARSH HARRIERS and another flock of WHITE-FRONTED GEESE that flew over us rounding off a great day.