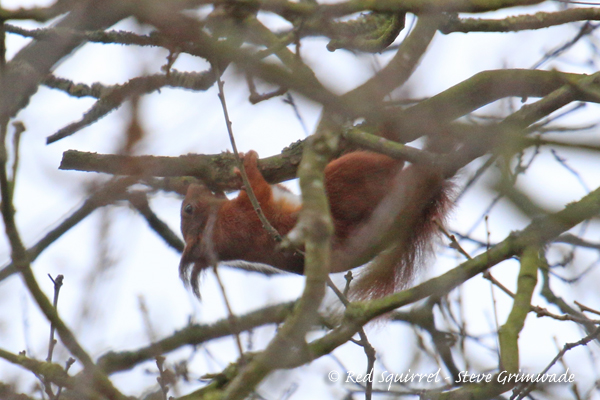 It was a cold day with a brisk easterly wind blowing but despite that we had a very enjoyable day exploring East Mersea. We kicked off by looking at the sea which produced two SLAVONIAN GREBES amongst around 35 GREAT CRESTED GREBES and a single RED-BREASTED MERGANSER. A female SPARROWHAWK zipped past and a female PEREGRINE powered offshore towards Colne Point.

It had just reached high tide as we strolled along the seawall and the grazing fields held a single COMMON SNIPE plus hundreds of TEAL, WIGEON and a few SHOVELER. There were good numbers of RINGED PLOVER and Dunlin along the shoreline until a few SANDERLING flew in for good measure. Eventually some mud began to show and more SANDERLING came in along with GREY PLOVER, KNOT, BAR-TAILED GODWIT and TURNSTONE.

With bitterly cold wind blowing, we retraced our steps back towards the country park where it was slightly out of the wind. STOCK DOVES displayed by the pond and many BLACKBIRDS foraged on the short grassland.

It was good to get back to the cars for lunch and to warm up!

Afterwards we took a clockwise route around the eastern part of the island noting our first MARSH HARRIERS gliding over the road. Along Shop Lane we struck gold when a RED SQUIRREL was spotted in a small woodland. Although tricky to see on occasions, we all managed to see it.

Down at the seawall we noted quite a few MARSH HARRIERS drifting over Langenhoe Marsh whilst on the muddy edges of the Colne were lots of AVOCETS. Seven COMMON SCOTER mid-river were good to see along with more RED-BREASTED MERGANSERS.

STONECHAT and REED BUNTINGS sheltered from the wind behind the seawall as we made our way back round to Cudmore Grove.

The walk ended after challenging conditions but everyone agreed it had been a good day!