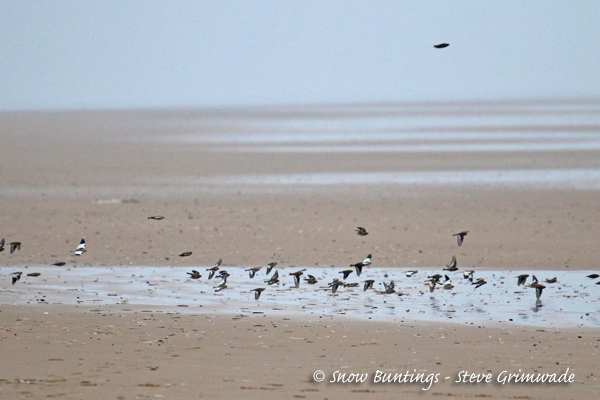 The weather was snowy and bleak as we headed up from Essex to Norfolk but thankfully it had cleared as we reached Titchwell RSPB reserve. A female BRAMBLING was seen on the feeders adjacent to the centre and a WATER RAIL showed well in the ditch along the main path. Cutting of the reeds produced another WATER RAIL in a channel although this one didn’t give such good views.

A wintery shower sent us scuttling into the Parrinder Hide where good numbers of waders were on the marsh. Eventually we reached the sea to find around 50 SNOW BUNTINGS flitting around the beach. The wind was biting as we scanned the sea but despite not staying long we managed to see around 50 VELVET SCOTER, 1 LONG-TAILED DUCK and hundreds of COMMON SCOTER. SANDERLING and BAR-TAILED GODWITS showed well on the beach before we headed back towards the centre.

Another stop at Parrinder Hide yielded RUFF, KNOT, PINTAIL, GADWALL and a few MARSH HARRIERS. Walking past the centre a small crowd were watching a WOODCOCK as it fed in the damp woodland and we had good scope views of this bird as it crept about.

Whilst tucking into our lunch, a LESSER REDPOLL fed in the alders close to the road with a few GOLDFINCHES.

The afternoon was spent at Holkham where we headed out to look for the flock of Shorelark but there was a huge amount of disturbance mostly by out of control dogs so there was no sign.

From Washington Hide we had distant views of a GREAT WHITE EGRET plus WHITE-FRONTED & PINK-FOOTED GEESE. A BLACK BRANT x DARK-BELLIED BRENT GOOSE hybrid was seen at the northern end of Lady Ann’s drive. As dusk fell it was great to see lots of MARSH HARRIERS hunting over the marshes!