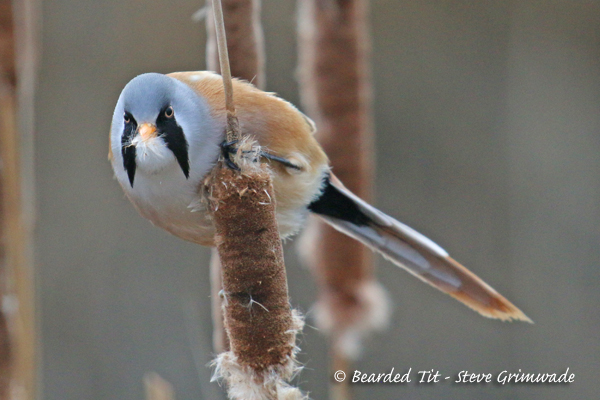 I was glad to be able to attend the first Essex Birdwatching Society coach trip of the year as leader and it was enjoyed by 37 participants including some first-timers. The morning session was rather quiet with lots of LITTLE GREBES and several thousand AVOCETS most of which were back in Essex!

Just before we thought about lunch we were treated to a flyover female PEREGRINE FALCON with prey, which was soon joined by a male. A lone GREENSHANK was seen on a pool plus a female GOLDENEYE was added to our lists.

Lunch was enjoyed by the shelter of the seawall and then we took in the eastern part of the reserve. Several STONECHATS were spotted and we enjoyed superb sightings of a 2nd calendar year male MERLIN which showed beautifully in the afternoon sunshine.

MARSH HARRIERS were numerous as were COMMON BUZZARDS with at least five birds seen. Three EGYPTIAN GEESE were out on the grazing fields but the best sight of the day were two BEARDED TITS showing ridiculously well in the reedmace right next to the path! Lots and lots of pictures were taken and even mobile phone footage as they were that close!

A BARN OWL flew over the reedbed and SPARROWHAWK was noted as we walked back to the coach. It was good to relax on the short journey back to Essex after a superb day of winter birding. A total of 74 species were recorded by the group.